As predicted yesterday another major quake! A magnitude 6.0 - 39km WSW of Pyu, Burma (Myanmar) is the second major quake of January 2018. 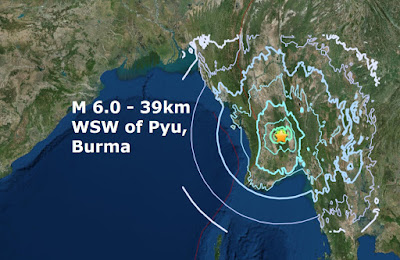 USGS
As promised yesterday due to a coronal hole on our sun facing earth major quakes are a possibility in the next couple of days see here.
A magnitude 6.0 - 39km WSW of Pyu, Burma (Myanmar) is the second major quake of  January 2018.
It comes after yesterday's magnitude 7.8 earthquake off the coast of Honduras which was one of the most powerful earthquakes ever recorded in the region.
As the first major quakes of 2018 struck in the last couple of days it should come as no surprise as a new coronal hole faces Earth.
After a quiet period the two are the first major quakes in almost a month.
Solar wind flowing from this coronal hole will reach Earth and cause polar geomagnetic activity on Jan. 13th.
Until then we could be in for more major quakes.
The days before the solar winds arrive can be a vulnerable time on our planet for earthquakes, as seen in the last two days.
Coronal holes are also known to influence other aspects here on Earth they are known to cause problems for animals who rely on the Earth's magnetic field to migrate.
The solar wind is also known to cause seizures and migraines in humans and behaviour problems in children and animals.