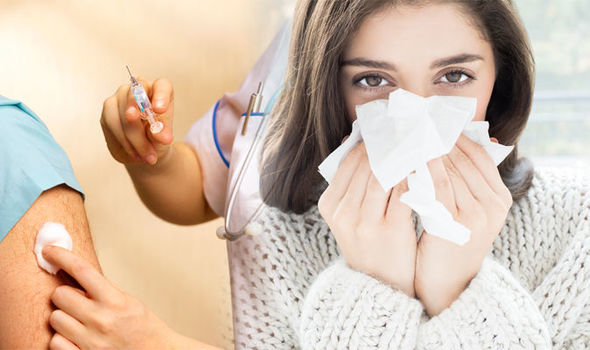 Photo Daily Express
It's exactly 100 years since the Spanish flu infected 500 million and killed an estimated 100 million people around the world.
Fast forward to 2018 and experts are worried another monster pandemic is emerging called "The Australian Flu!"
And the caveat is, this season's flu vaccines are no match for this new virus.
Australia's 2017 flu season is now over but public health officials reported record-high rates of flu, as well as above-average numbers of hospitalizations and deaths.
The most common flu strain there was the influenza A virus known as H3N2, and the vaccine given to Australians had an effectiveness of only 10%, according to preliminary estimates.
According to La Times, the vaccine now being administered to the West uses the same formulation.
Even worse, nearly three-quarters of the 1,544 laboratory-confirmed cases of flu seen in the U.S. since Oct. 1 were of the H3N2 variety, according to the Centers for Disease Control and Prevention.
The Daily Mail claims flu fatalities have soared by 77 percent in just a week in England, Government figures reveal as fears of the worst outbreak in 50 years loom large.
The latest update, released today, states 93 people have lost their lives to flu already this winter - 85 in England and eight in Scotland. The figure for England compares to the previous total of 48 recorded last week.
Scotland appears to have been hit the hardest in the UK so far this winter because it is the only home nation to report a significant number of ‘excess deaths’ - when more deaths have occurred than expected.
Aussie flu, the H3N2 strain of flu which was given its name after it caused problems in Australia during its winter, is now infecting people in the UK at an alarming rate.
Almost 2,000 people have been hospitalised by flu this winter, the report also revealed, and one in four of those cases were caused by deadly Aussie flu.
Japanese flu
Another strain of flu, Yamagata or Japanese flu, was reported to have infected people in Greater Manchester this week.
Japanese flu is a subtype of Influenza B, whereas Aussie flu is a type A.
It has similar symptoms to other sub-types of 'flu but it's generally milder than A strains, according to Dr Coyle
He added: “Yamagata also tends to affect mainly children and is much more contagious as a result because children spread viruses more easily than adults.