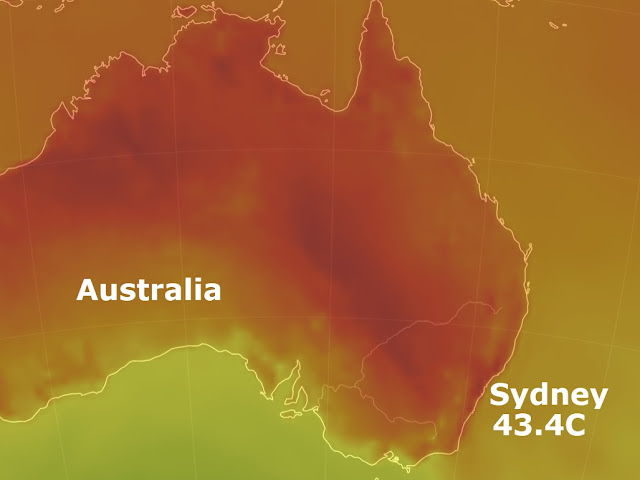 USGS
Demand for ambulances has risen by 40 per cent across the Sydney metro area today, with temperatures in the western suburbs hitting 40 degrees Celsius.
By 2:30pm Penrith had reached 43.4C, while several suburbs in Sydney's west had reached 40C, including Badgerys Creek, Bankstown, Camden and Horsley Park.
Areas in the east were spared thanks to some sea breezes.
Temperatures at Observatory Hill were just shy of 30C.
NSW Ambulance chief inspector Brian Parsell said they expected demand for ambulances to continue to rise throughout the afternoon, and said children and the elderly were most at risk in the hot weather.
He encouraged people to stay indoors and to avoid sports and physical activities.
"Turn on the air conditioning or turn on a fan, make sure you increase your oral fluid intake so that you remain hydrated," Inspector Parsell said.
Ben Scalley from NSW Health said dehydration and heat stroke were common health problems during heatwaves, but there were also increased incidents of other illnesses.
A total fire ban has been declared for the Greater Sydney and Illawarra-Shoalhaven regions.
Simon Louis from the Bureau of Meteorology said there would be a little relief from the heat overnight, but it would be short lived.
"The temperatures will bounce back quite quickly, we are expecting fairly hot conditions over the weekend and into the early part of next week," he said.
Mr Louis said Tuesday would be very hot, especially in the west of the state.
"If you think it feels hot in western Sydney, spare a thought for those out in places like Bourke or Dubbo.
As always that is a very hot part of the state but they're going to start to see temperatures up in the mid 40s," he said.