It is one of the most active quake areas in the world with a nuclear site sitting on a fault line! Iran suffers a swarm of more than 50 quakes in 10 hours 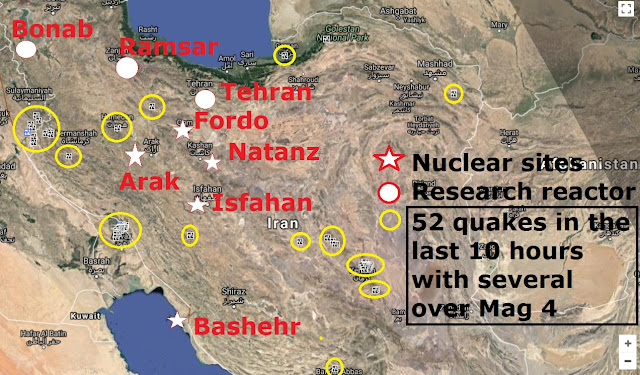 Click on image to enlarge/RSOE Alertmap
52 quakes in 10 hours in 5 different regions swarm Iran
It is one of the most active quake areas in the world, and just last month more than 300 people were killed in when a magnitude 7.3 earthquake jolted the country.
Iran also has 5 nuclear sites and 3 research reactors with the Bushehr nuclear site actually built right on top of a tectonic fault line.
This morning Iran was under the earthquake cosh as more than 50 quakes struck in just 10 hours with several of them larger than magnitude 4 on the Richter scale with no sign of an end to the swarm anytime soon.
Since the magnitude 7.3 struck in November which killed 350 people and injuring 4,000 Iran has suffered a barrage of major, medium and smaller quakes.
At the beginning of December Iran was struck by three more big quakes when a mag 6.0 and two magnitude 5.1 aftershocks rocked the Bushehr Nuclear site, which actually sits on a fault line.
Two weeks later another mag 6.0 -struck 64km NNE of Kerman, Iran smack in the middle of three uranium mines and the Bushehr nuclear site.
It is an accident waiting to happen with consequences equaling Chernobyl and Fukushima.