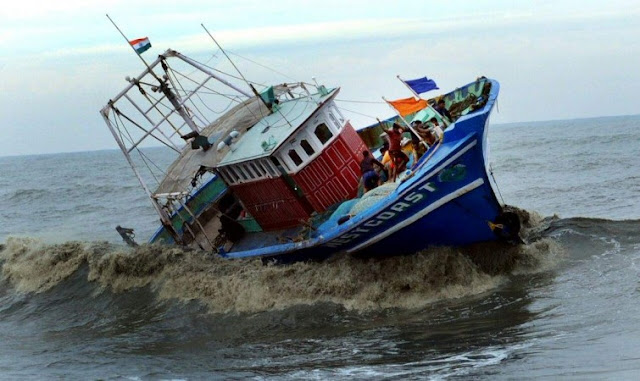 Photo ibtimes.co.in
As Mumbai braces for Cyclone Ockhi, areas near the metropolis witnessed a spell of hailstorm, while schools and colleges in the city and adjoining districts have been closed today as a precautionary measure.
"Intermittent rain/thundershowers very likely to occur in Mumbai and suburbs in next 24 hours," said a report of the India Meteorological Department (IMD) Mumbai at 8 am.
"Heavy rainfall is likely at a few places with squally wind speed reaching 50 to 60 km per hour gusting to 70 km per hour very likely along coastal area in next 24 hours," it further said.
After an alert by the IMD Mumbai observatory, the state government has announced a holiday today for schools in Mumbai, Sindhudurg, Thane, Raigad and Palghar districts.

Goa's beach tourism was battered by the rising water from the sea due to cyclone Ockhi as shacks crumbled under its impact, while those left to stand were dismantled by their owners on Monday. With the high tides showing no signs of ebbing-another one is expected on Monday night that may rise up to 2.5 metres-the district collectors of both North and South Goa rushed to the state government with recommendations to declare it as a state disaster.
The recommendation is likely to be accepted by the state disaster management authority chaired by chief minister Manohar Parrikar and consisting of revenue minister Rohan Khaunte at its meeting on Tuesday.
The state's 105-km long coastline is home to at least 350 authorised shacks on the beaches, while another 600 are located on private properties.
Strong winds caused some panic as stretches of the coastline wore a near-deserted look during the peak tourist season.
Popular beaches such as Colva in south Goa and Baga-Calangute-Candolim in Bardez and Arambol and Mandrem in Pernem in north Goa, which register huge footfalls daily, had very few tourists.
"The lifeguards kept warning tourists to stay away from the water throughout the day due to rough sea conditions," a source said.
By evening, the wind speed accelerated and even blew away sand.
"It was becoming difficult to walk on the beach and the lifeguards helped the tourists to safety by 4pm," the source said.
Experts said it was a double whammy for beach tourism-the cyclonic storm Ockhi in the Arabian Sea and a full moon on Sunday.
In Goa, a supermoon episode had also flooded beaches in 2011.
"The powerful swell caused by the storm travelling from the region of deep depression to the shore and the higher range of tide during the full moon combined to push the water towards the shore and cause havoc," Anthony Joseph, a retired chief scientist of the national institute of Oceanography (NIO), said.
He said no deep depression as severe as this was witnessed in the past few years.
Shack operators reckon this is the worst disaster they can remember.
"We have been in business for 40 years, but this is unlike anything I have seen in my life-worse than a tsunami," said Lobo.