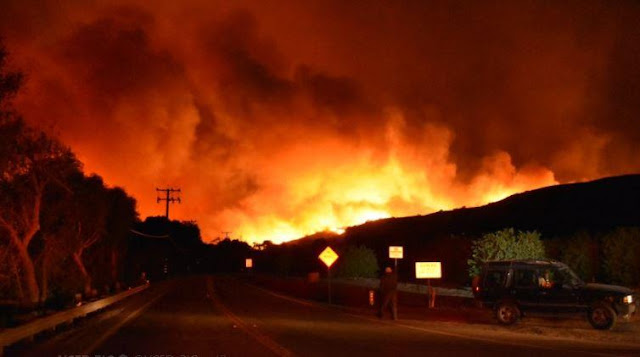 cbsnews.com
A new wildfire named Thomas has exploded in Southern California as ferocious winds are feeding the flames as the fire approaches Santa Paula and the city of Ventura which could cause the evacuation of nearly 150,000 people
"The fire growth is just absolutely exponential," Ventura County Fire Chief Mark Lorenzen said. "All that firefighters can do when we have winds like this is get out ahead, evacuate people, and protect structures."
According to abcNews winds exceeding 40 mph and gusts over 60 mph have been reported in the area and are expected to continue, the National Weather Service said.
Thousands of homes were without power in the area.


In October this year, 23 people died along with 3,500 structures destroyed and 20,000 people evacuated as the deadliest wildfire in California history claimed 170,000 acres.

In August 2016 an unprecedented 80,000 people were forced to abandon their homes as Californian wildfires caused devastation

The fact that more than a hundred million dead trees have been monitored in California does not help the situation.