A strong intensity earthquake measuring 6.9 on Richter Scale reduced to a mag 6.3 by USGS strikes Tibet 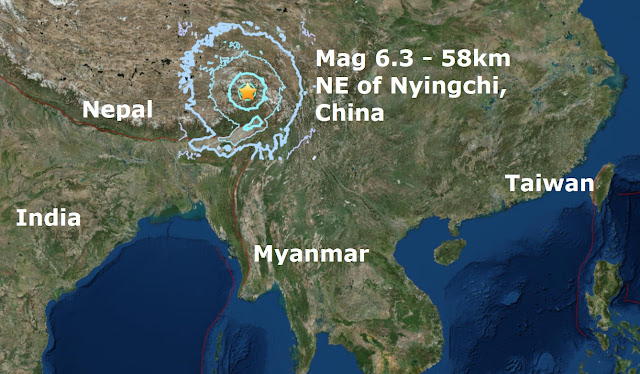 USGS
A strong intensity earthquake measuring 6.9 on Richter Scale hit Tibet's Nyingchi Prefecture, located close to Arunachal Pradesh border, in the early hours of Saturday.
The quake struck at 6:34 a.m (Beijing Time), according to the China Earthquake Networks Center (CENC).
The quake struck at a depth of about 10 km, state-run Xinhua news agency reported.
It was followed by a 5-magnitude earthquake at 8:31 a.m (Beijing time) around the same place in the Tibet Autonomous Region.
The second quake struck at a depth of about 6 km.
Reports of any casualties and damage are awaited.
Last night's quake was the 10th major quake of November and is the 96th major quake of a very quiet 2017 as this year promises to be the lowest total of major quakes this century.