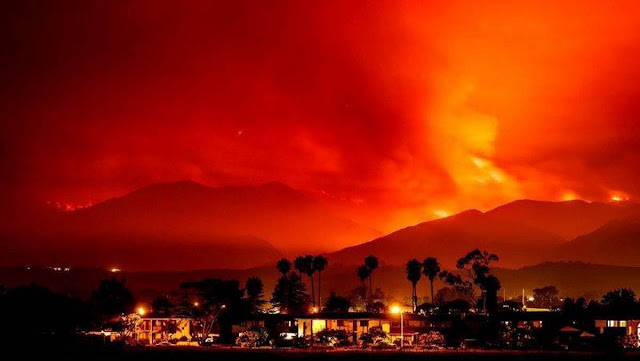 Photo nbcnews.com
Firefighters facing a resurgence of high winds on Wednesday struggled to halt wildfires that have killed at least 23 people, destroyed 3,500 structures and left hundreds missing in chaotic evacuations across northern California's wine country.
Nearly two dozen blazes spanning eight counties have charred around 170,000 acres (68,797 hectares).
Flames erupted on Sunday night when gale force winds toppled power lines across the region, possibly igniting one of the deadliest wildfire outbreaks in California history.
Flames were spread rapidly by hot, dry "Diablo" winds - similar to Southern California's Santa Ana winds - that blew into northern California toward the Pacific on Sunday night.
The official cause of ignition has not been determined.
But electric wires knocked down by those same winds may have sparked the conflagration, according to Daniel Berlant, spokesman for the California Department of Forestry and Fire Protection (Cal Fire). 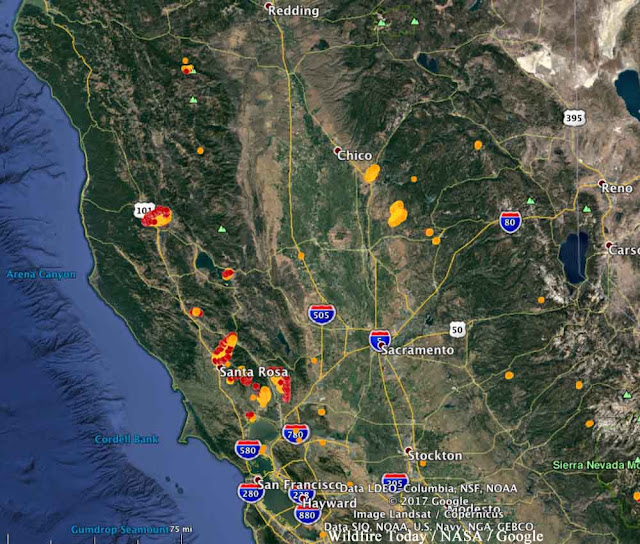 (Above Map showing the location of the wildfires in Northern California. The red dots represent heat detected by a satellite at 12:54 p.m. PDT October 9, 2017. The yellow dots were detected in the previous 24 hours. Map compiled by WildFireToday )

"That is definitely a possibility," he told Reuters.
"Power lines are a common cause of fires during wind events," Berlant said some of the victims in northern California were asleep when the fast-moving fires broke out, igniting their homes before they could escape. 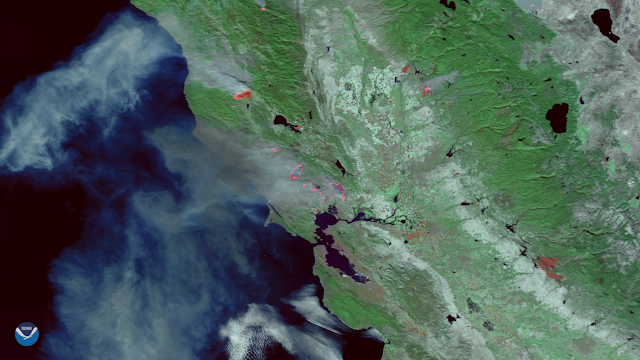 Credit NOAA
At least 20,000 people remained under evacuation as the fires raged largely unchecked for a third day, belching palls of smoke that engulfed the region and drifted south over the San Francisco Bay area, where some residents donned face masks.
The entire town of Calistoga, a Napa Valley community of some 5,000 residents spared from advancing flames the first night of the fire, was ordered to evacuate on Wednesday evening, as the county sheriff's office warned that conditions had worsened.
More than 550 people were still reported unaccounted for in Sonoma County on Wednesday morning, said Jennifer Laroque, a county emergency operations centre spokeswoman.
It was unclear how many of the missing might be actual fire victims rather than evacuees who merely failed to check in with authorities after fleeing their homes.
Officials urged displaced residents to let their family members know they were safe.
The Sonoma County town of Santa Rosa, the largest city in the wine country region, was particularly hard hit by one of the fiercest blazes, the so-called Tubbs fire.
Block after block of some neighbourhoods were virtually obliterated with nothing left but charred debris, broken walls, chimneys and the steel frames of burned-out cars.
"It's like driving through a war zone," J.J. Murphy, 22, one of the thousands of evacuees, said of the area around his home in the Sonoma Valley community of Glen Ellen. Murphy, five relatives, a bird, a dog and two cats piled into their camper van to flee on Monday, he said.
"It's crazy how in just a few hours a place I've recognized all my life I can't recognize," he said at a roadside food stop in the town of Sonoma.
In the town of Napa on the first night of a blaze dubbed the Atlas fire, nearly 50 people who were in danger of being overrun by flames were rescued by the crews of two California Highway Patrol helicopters working in tandem during a seven-hour aerial evacuation operation.
The weather gave firefighters a bit of a respite on Tuesday as cooler temperatures, lower winds and coastal fog enabled them to make headway against the flames.
Fire crews laboured on Wednesday to strengthen containment lines as winds picked up again.
"We're not out of the woods and we're not going to be out of the woods for a great number of days to come," Ken Pimlott, director of the California Department of Forestry and Fire Protection (Cal Fire), told a news conference.
In addition to high winds, fires were stoked by an abundance of thick brush and other vegetation left tinder-dry by a summer of hot, dry weather and months with little or no rainfall.
The cause of the fires remained under investigation.
Matt Nauman, a spokesman for the region's main utility, Pacific Gas and Electric, acknowledged that fallen power lines were widespread during the "historic wind event," which he said packed some hurricane-strength gusts in excess of 75 miles per hour (120 km/h).