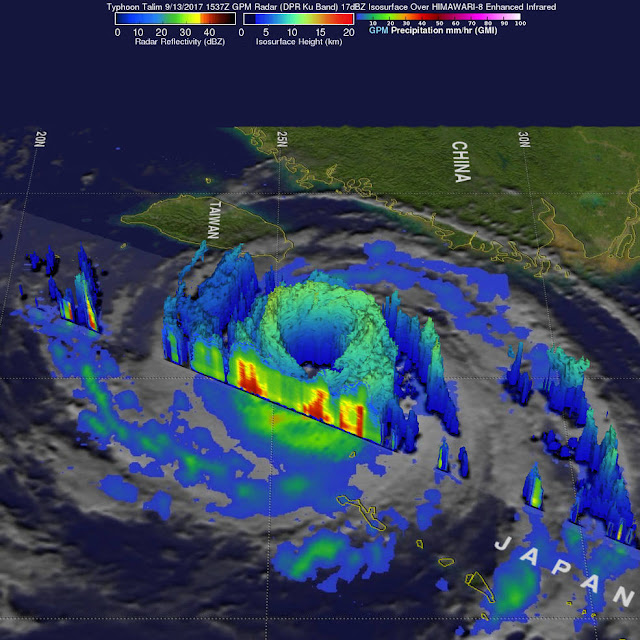 This dramatic 3-D view of Talim's eye was taken from the GPM core satellite EDT.
Many of the storm tops on the western side of Talim's eyewall are shown extending to heights above 12km (7.4 miles) where rain was falling at a rate of over 232 mm (9.13 inches) per hour.
Cloud tops were lower on the eastern side of the typhoon.
Credits: NASA/JAXA, Hal Pierce

A powerful typhoon ripped into southern Japan on Sunday (Sept 17), dumping torrential rain, grounding hundreds of domestic flights and halting train services.
Typhoon Talim made a landfall in Kyushu, the southernmost of Japan's four main islands, packing winds of up to 162kmh, the Japan Meteorological Agency said.
At least 644 domestic flights have been cancelled because of strong winds, according to public broadcaster NHK, while all major regional train services have been suspended, operator JR Kyushu Railway said.
Authorities have issued warnings of rainstorms, high seas, possible landslides and flooding across the southern half of the Japanese archipelago.
The meteorological agency said the typhoon was expected to head northwards, dumping heavy rain across a large area, including on Tokyo.
The typhoon had earlier battered the southern Okinawan island chain, dumping the most rain seen over a 24-hour period in 50 years on the city of Miyako, before it hit Kyushu.
Big storms regularly strike Japan, with 22 people killed when Typhoon Lionrock pounded the country last September.
Last month, Typhoon Noru killed two and injured 51.