Hurricane Irma Update: Catogory 5 storm is Heading for the Turk and Caicos Islands after laying waste to St Martin and Barbuda 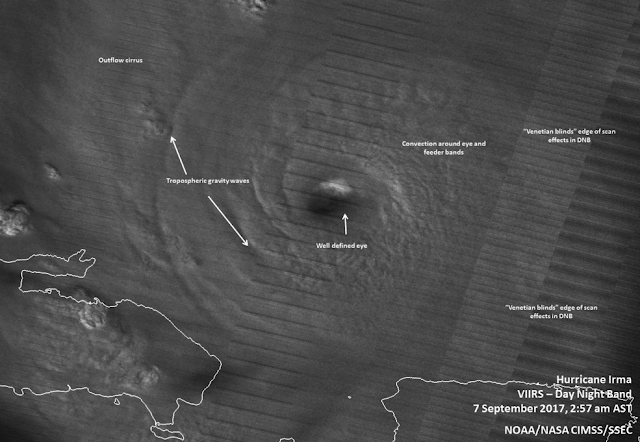 Hurricane Irma - a Category 5 hurricane with winds as strong as 190mph -- continued roaring toward Florida early Thursday, carving a path of death and destruction through tiny Caribbean islands and threatening the larger and more populous islands of Hispaniola and Cuba.
Officials said Thursday three people died in Puerto Rico and one person died in Anguilla, raising Irma's death toll to at least 10 in the Caribbean.
Three people died when Irma hit the island of Puerto Rico, including a 79-year-old woman, the territory's governor said, according to Reuters.
The elderly woman, who the government described as bedridden, died after a fall while being transported to a shelter.
The other fatalities were a woman in Camuy, who was electrocuted in her home and a man who died of injuries suffered in a traffic accident in Canovanas during the storm, according to a statement from Governor Ricard Rossello obtained by the news agency.
Damage to the Dutch side of the Caribbean island of Saint-Martin was said to be "enormous," with roofs torn off buildings.
At least eight deaths were reported on the French side of the island.
At least one other death was reported on the island of Barbuda, where the prime minister described a "horrendous situation" of "total carnage."
In Puerto Rico, about 900,000 people were said to be without electricity.
Hurricane Irma has killed at least 10 people and injured dozens of others in the Caribbean as the dangerous Category 5 storm roared over the region.
French Interior Minister Gerard Collomb told Franc Info that eight people died and another 23 were injured in the French Caribbean island territories of St. Martin and St. Barthelemy, which felt the full force of the storm early Wednesday.
That number is expected to rise.
Authorities say at least one person has died in the northeast Caribbean island of Anguilla, said the Caribbean Disaster Management Agency early Thursday.
The agency also said 90 per cent of roads in Anguilla are impassible.
On Wednesday, a two-year-old child was killed as a family tried to escape their home during the chaos.
Officials on a number of islands have reported widespread, and in some cases near total, destruction of homes and other infrastructure.
Daniel Gibb, a local official on St. Martin, told Radio Caribbean International that "95 per cent of the island is destroyed."
"I have sick people to evacuate, I have a population to evacuate because I don't know where I can shelter them," he said.
Photos and video circulating on social media from St. Martin showed major damage to the airport in Philipsburg and the coastal village of Marigot heavily flooded.
France sent emergency food and water there and to the French island of St. Bart's, where Irma ripped off roofs and knocked out electricity.
The southern half of the island - which is Dutch territory, known as St. Maarten - also suffered "enormous damage," according to the Dutch Royal Navy.
The navy tweeted images gathered by helicopter of damaged houses, hotels and boats.
The airport was unreachable, it said. By 8 a.m. Thursday, the centre of the storm was about 180 kilometres north of Punta Cana, Dominican Republic, moving west-northwest at 28 km/h and packing winds of 285 km/h.
Irma blacked out much of Puerto Rico, raking the U.S. territory with heavy wind and rain while staying just out to sea, and it headed early Thursday toward the Dominican Republic and Haiti.
To the east, authorities struggled to get aid to small Caribbean islands devastated by the storm's record 298 km/h winds earlier Wednesday, while people in Florida rushed to get ready for a possible direct hit on the Miami area.
Communications were difficult with areas hit by Irma, and information on damage trickled out.