Commuter stampede on a Mumbai railway bridge horror: 22 dead with casualties expected to rise a month after 33 died after building collapse. 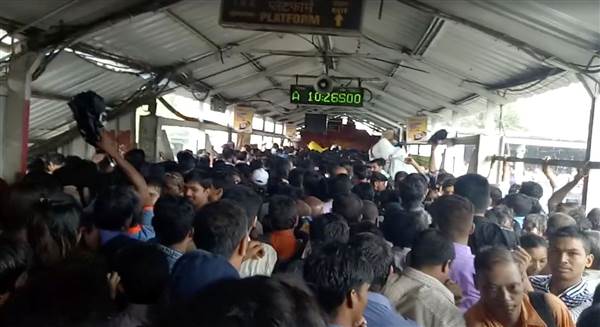 Photo nbcnews.com
A commuter stampede on a Mumbai railway bridge lashed by a monsoon storm during the morning rush hour Friday killed at least 22 people, officials said.
Dozens of people took shelter on the bridge from a sudden downpour and the deadly crush started as they emerged all at once, an Indian Railways spokesman said.
"The incident occurred as heavy rains lashed Mumbai and passengers took refuge on the foot overbridge.
People at the front slipped and the huge crowd toppled over leading to the stampede," spokesman Ravindra Bhakar said.
"Twenty-two dead have been confirmed, 14 men and eight women are among the dead.
Some 32 passengers are injured."
The toll was likely to rise, a disaster management cell spokesman warned, with several of the injured undergoing treatment in hospitals in India's financial capital.
Trains were briefly halted and a formal enquiry has been ordered into the tragedy, Bhakar added.
The stampede broke out at 10:30 am local time near a ticket window on the bridge that connects the Elphinstone and Parel stations in south Mumbai.
TV footage showed commuters trying to revive the injured by pumping their chests and also carrying some downstairs to street level.
Anita Kamble, a 37-year-old who lives near the railway station, said she was alerted by a loud noise. "Women were screaming all around.
We couldn't figure out anything as the bridge and the streets were overflowing with people," she told AFP.
It was a horrific sight.
We saw injured people being carried away by police."
Another resident Babita Kamble said the bridge was old and quite narrow.
"There are a lot of problems with the bridge and it definitely needs rework and repair.
This is a regular feature during monsoon, there is so much crowding with no safety measures in place."
Prime Minister Narendra Modi said in a Tweet that the Mumbai events were being monitored with the railway's minister in Mumbai and ensuring all assistance was being given.
The stampede is the latest disaster to hit the city struggling with a crumbling infrastructure and poor planning.
Earlier this month, some 33 people died after a building collapsed during a monsoon storm.
Local trains are the lifeline for the 20 million people of Mumbai. Some 7.5 million commuters take the train daily, with services running every three minutes on average.
Hundreds die every year due to losing their grip on the doors, falling while trying to get into packed compartments, hitting electric poles outside or doing stunts while hanging off the train.
Official figures say some 3,400 people died in 2016 either from falling off the trains or while crossing the tracks of what is the world's most overcrowded suburban rail network.
Stampedes are also common at India's religious festivals with police and volunteer stewards often overwhelmed by crowds.
In January, six women died in West Bengal state and last year 24 people were killed after a stampede broke out in the Hindu holy town of Varanasi.