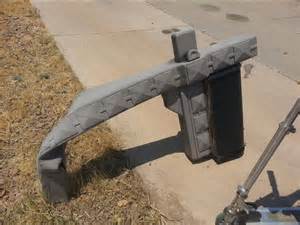 Photo melted mailbox
The main burn center in Phoenix has seen its emergency department visits double during the heat wave that is scorching the Southwest U.S., including people burning their bare feet on the scalding pavement.
Dr. Kevin Foster, director of the Arizona Burn Center, said this June is the worst the center has seen in 18 years.
Most patients arrive with contact burns from touching hot car interiors or walking outside without shoes.
Foster said one child received contact burns after crawling through a doggy door onto the hot pavement.
"Getting up to 120 really makes a difference," Foster said.
The burns are among several hazards resulting from a heat wave that has plagued Arizona, Nevada and California, including deaths, increased wildfire risks and a water shortage in one community.
The heat wave brought a high of 119 degrees (48 degrees Celsius) in Phoenix on Tuesday.
Las Vegas topped out at 117, and California has been broiling in triple-digit temps.
People in Arizona are used to triple-digit temperatures in the summer, but an extreme heat wave gripping the Southwest this week had temperatures rising to 120 degrees.
At that extreme temperature, strange things begin to happen.
Arizona residents have been posting photos on social media of objects that they say have melted due to the extreme heat.
It's important to note that none of these photos have been independently verified.
The melted mailbox photo prompted KSAZ to ask an expert if it was possible for extreme heat to do that kind of damage.
The engineering expert said that while it was unlikely that the plastic post completely melted, the heat could have weakened it, causing it to fall over, KSAZ reported.
As for the photos of melting street signs, KPNX verified via a transportation official that the damage to the sign was age-related, not specifically heat-related.
And the photo of the melted trash bin?
That was posted on Reddit in 2016, and many doubted its veracity then.
One thing is for certain: The heat in Arizona is no joke.
Flights were grounded temporarily this week at Sky Harbor International Airport in Phoenix due to the extreme temperatures.
Phoenix emergency rooms have seen an increase in burn cases, most contact burns from bare skin touching pavement or a hot car's interior, azcentral reported.
Pet owners are urged to take precautions as an increase in heat-related emergencies has been reported at Arizona animal hospitals.