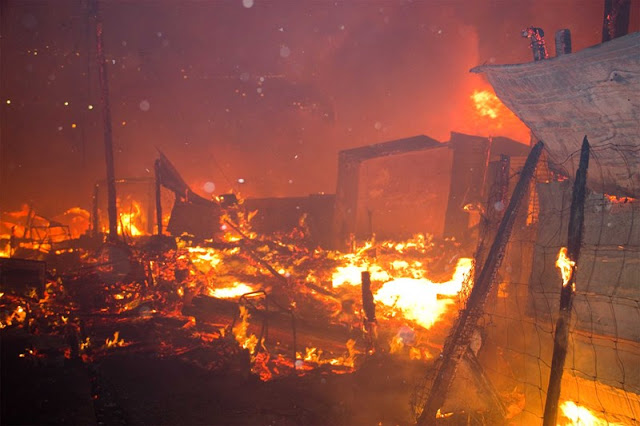 Photo algoafm.co.za
Up to 10,000 people have been evacuated from Knysna as a result of runaway fires in the area. Evacuations have been carried out in several areas including Brenton, Belvedere and Knysna Heights. Three people have died as a result of the blaze.
Officials have described the Knysna fire as the largest and most destructive fire in a built-up area in recent years.
The SANDF has been roped in to the area on Thursday morning to assist in quelling the fire.
The province's spokesperson James-Brent Styan: "We've been in contact with the SANDF, so they're looking at sending additional resources to the area at first light.
Conditions are very tough, The strong wind is making it very difficult to fly helicopters on those conditions."
At least 50 properties - including the hostel of Knysna High School - have reportedly been gutted by the blaze which broke out on Tuesday night.
A provincial hospital was also evacuated while 15 buses from George were dispatched to Knysna to assist with evacuations.
One resident says his home was destroyed in a matter of minutes: "It happened in minutes.
The fire was actually a couple of kilometers away and it flew over a hill and caught light on our side of the hill and was on top of us within minutes." NGO's and other groups have also stepped in to help as the fire continues to ravage the region.
Knysna municipality's Fran Kirsten: "We have a lot of manpower trying to contain that fire but it has started flaring up in the night.
The wind is blowing quite heavily now and that fire is posing a problem at the moment."