A glance at the future! A very rare meteorological tsunami hits the Dutch coast Monday with a seven foot tidal wave 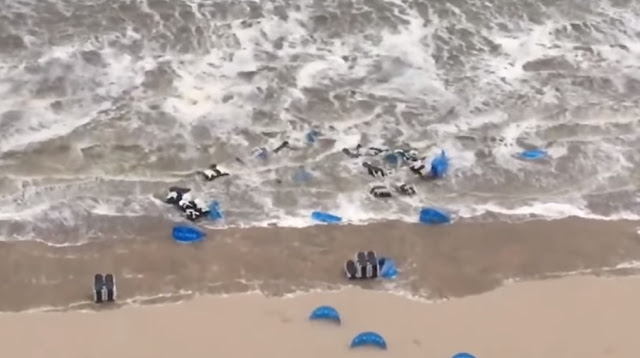 Footage has emerged of a mini tsunami hitting the coast of The Netherlands catching beachgoers off guard with a seven foot tidal wave.
According to local media, the phenomenon is so rare that it is the first time it has been so well filmed and documented.
The first reports of an approaching tidal wave of a medium height were at around 5.45am on Monday morning.
In footage shot from the balcony of a flat in the coastal resort of Zandvoort, the wave can be seen sweeping away beach chairs, boats and parasols.
The man filming is heard saying 'a tsunami!' multiple times in disbelief at what he is seeing.
In another video filmed from a sailing club 15 miles away in the resort of Katwijk the sea is clearly seen retreating first.
A big wave crashes ashore with lightning flashing in the background.
No one was injured in the incident although there was some damage.
The unique phenomenon is called a meteotsunami or meteorological tsunami.
It is generated when rapid changes in atmospheric pressure cause the displacement of a body of water.
It often emerges as the forerunner of a thunderstorm front and corresponds essentially to a cold front. They occur more frequently in the spring when the North Sea water is still cold.
On Monday in the Netherlands, a big thunderstorm was approaching from the sea and an inversion was recorded.
Meteorologists speak of inversion when the air on the ground is cooler than in the upper air layers, which then changed the air pressure causing the meteotsunami together with strong gusts.
The last recorded meteotsunamis in the Netherlands occurred in 2004 and 2006.
They have also been recorded in the United Kingdom.
The first ever officially identified one hit the Cornish coastline in June 2011.
Professor David Tappin of the British Geological Survey said: 'Most tsunamis are geological, where you have a vertical movement on the seabed which can be caused by an earthquake, like in Japan in 2011, or a landslide.
'Meteotsunamis, however, are created by weather.
You need a small, rapid change in atmospheric pressure of just a few millibars, if you get one of these then it can change the sea surface elevation by a few centimetres.'
'In the deep ocean this would not be noticeable but when it enters shallow water whilst the weather system is moving at the same speed then the sea level increases by several metres.'