Wildfire rages in highly radioactive Fukushima mountain forest! The area is designated as a "difficult-to-return zone" 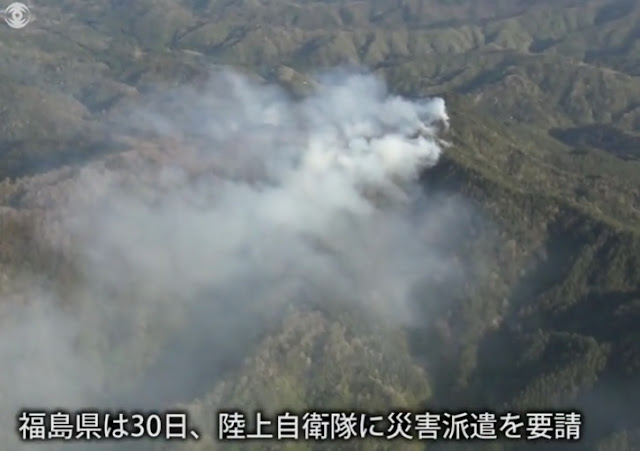 A fire broke out in a state-owned mountain forest near the crippled Fukushima No. 1 Nuclear Power Plant on the evening of April 29, consuming an area approximately 10 hectares in size by the following evening, according to prefectural authorities.

The fire started on 448-meter-high Mount Juman in Namie, Fukushima Prefecture, prompting the prefectural government to request the dispatch of the Ground Self-Defense Force (GSDF) on a disaster relief mission on April 30.
A total of eight helicopters from Fukushima, Miyagi and Gunma prefectures as well as the SDF discharged water on the site to combat the fire.
The area is designated as a "difficult-to-return zone" due to high radiation levels from the Fukushima nuclear disaster, and entry into the area is barred in principle.
According to the Fukushima Meteorological Office, a lightning advisory had been issued for the town of Namie when the fire broke out, and Fukushima Prefectural Police suspect that lightning was to blame for the blaze as they continue to investigate the cause of the incident.