Waiting for the big one! Magnitude 8.0 or greater has somehow missed California in more than 100 years: A question of when not if! 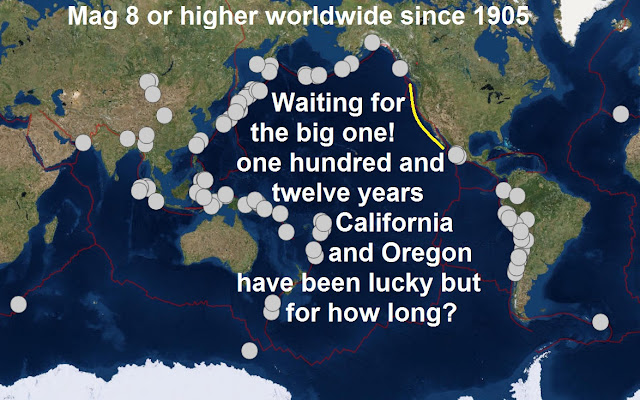 USGS
Since 1905, 91 quakes of magnitude 8. Or higher have been recorded around the world and 90% of them have been on the Pacific ring of fire.
The Ring of Fire is a major area in the basin of the Pacific Ocean where a large number of earthquakes and volcanic eruptions occur.
The Ring of Fire is sometimes called the circum-Pacific belt, see map above.
90% of all major quakes happen on the Ring of Fire which runs along the coastlines of eastern Australia, Indonesia, China Japan and eastern Russia, Alaska, the western coast of northern America, the west coast of Central America and the west of South America.
However there is a gaping hole, there has never been a magnitude 8. Or higher along the western coast of the US, below Canada.
In 1964 a magnitude 9.2 one of the world’s largest quakes ever, struck Southern Alaska and in 1949 a magnitude 8.2 struck the west coast of Canada, Mexico’s west coast has recorded three magnitude 8+ quakes over the years but Oregon and California have somehow remained safe, but for how long, it is a question of when not if!

"We are fortunate that seismic activity in California has been relatively low over the past century.
But we know that tectonic forces are continually tightening the springs of the San Andreas fault system, making big quakes inevitable,” Tom Jordan, director of the Southern California Earthquake Center said in a statement.

Estimates of the chance of a magnitude 8.0 or greater earthquake hitting California in the next three decades have been raised from about 4.7% to nearly 10%, the U.S. Geological Survey claims. Scientists said the reason for the increased estimate was because of the growing understanding that earthquakes aren’t limited to separate faults, but can start on one fault and jump to others.
The result could be multiple faults rupturing in a simultaneous mega-quake.

Top 5 Earthquakes of all time