South American catastrophe: At least 102 killed and 212 wounded in Colombia city floods just a week after 92 died in Peruvian floods 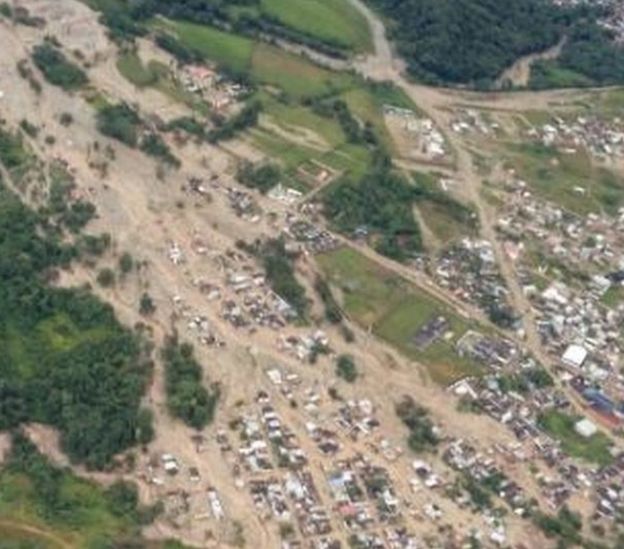 Photo Colombia fire service
At least 102 people were killed and at least 212 injured in floods in Mocoa, the capital of Colombia’s southern Putumayo province, the Red Cross and the army reported Saturday.
A large part of the city was hit by a mudslide caused be heavy rains, destroying the local hospital and allegedly wiping away entire neighborhoods.
President Juan Manuel Santos said Saturday morning he would travel to the disaster area and ordered all aid and military units to deliver immediate support.
Meteorologists across Colombia are on alert because this year’s rainy season is combined with “La Niña,” a weather phenomenon bringing extra rain from the Pacific Ocean.
In Mocoa, the excess in rainfall caused the overnight overflowing of three rivers, the Mocoa, the Mulato and the Sancoyaco, that wiped away “much of the city” little after midnight, Mayor Jose Antonio Castro was quoted as saying by newspaper El Tiempo.
March was the country's rainiest month since 2011, according to the state meteorological agency. Putumayo borders Ecuador and Peru.
Across Peru more than 90 people have died since the start of the year because of unusually heavy rainfall, which also caused landslides and flash floods.
Peruvians struggled to cope with avalanches, mudslides and extensive flash flooding caused by torrential downpours.
It has been a bad year for flooding in Peru, and the toll including from the latest dangerous weather now stands at over 90 with many still missing, the government said.
Devastating damage reports continue to pour in.
The National Emergency Operations Center said over 150,000 Peruvians had lost everything since the beginning of the year, while nearly 1 million had suffered serious damage to their homes.