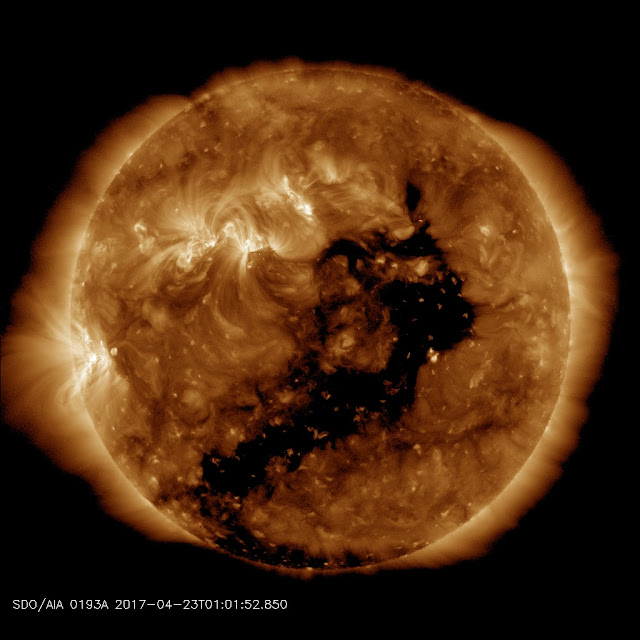 Photo SDO
Solar wind is flowing from this massive coronal hole and has reached Earth early causing magnetic storms around the Earths magnetosphere: Credit: NASA/SDO.
This is a "coronal hole" (CH) -- a vast region where the sun's magnetic field opens up and allows solar wind to escape.
Gaseous material (solar wind) flowing from this coronal hole reached Earth at remarkable speeds of almost 800 km/s and is causing geomagnetic storms, see below

We've seen this coronal hole before.
On March 27th it lashed Earth's magnetic field with a fast-moving stream that ignited intense auroras around both of Earth's poles.
The coronal hole is potent because it is spewing solar wind threaded with "negative polarity" magnetic fields.
Such fields do a good job connecting to Earth's magnetosphere and energizing geomagnetic storms, see below.

Explanation
The K-index, and by extension the Planetary K-index, are used to characterize the magnitude of geomagnetic storms.
Kp is an excellent indicator of disturbances in the Earth's magnetic field and is used by SWPC to decide whether geomagnetic alerts and warnings need to be issued for users who are affected by these disturbances.
The principal users affected by geomagnetic storms are the electrical power grid, spacecraft operations, users of radio signals that reflect off of or pass through the ionosphere, and observers of the aurora.

The massive Coronal hole is not the only returning visitor causing disturbances in the Earth's magnetic field
Old sunspot AR2644 has returned--and it is still active.
In early April the active region produced a series of M-class solar flares and shortwave radio blackouts.
Now, following a two week trip around the farside of the sun, AR2644 is has returned.
On April 18th at approximately 2000 UT, the sunspot's magnetic canopy exploded and hurled a bright coronal mass ejection (CME) into space.
Note: By longstanding tradition, sunspots that travel around the backside of the sun and re-appear are renumbered. AR2644 therefore has a new designation: AR2651 see below.

Photo SDO
Earlier this morning around 0500 UT, a dark filament of magnetism on the sun exploded. See the movie below from NASA's Solar Dynamics Observatory.
An analysis is underway to determine if any portion of the debris is heading for Earth. Stay tuned.