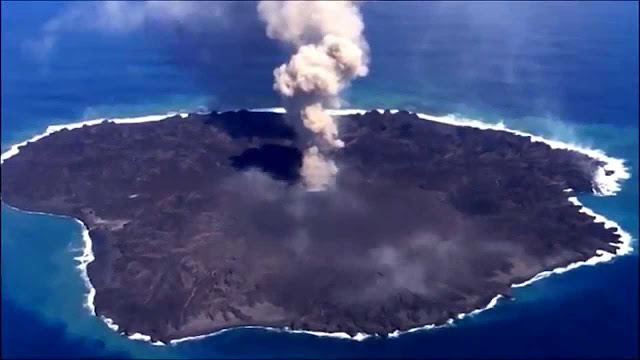 Stock photo
A volcanic bomb shot up about 100 meters into the sky and molten rock rolled down toward the sea on April 21 on Nishinoshima island, about 1,000 kilometers south of Tokyo, erupted for the first time in 17 months.
"Intensive volcanic activity will continue for a while.
Lava will eventually reach to the sea," said Setsuya Nakada, a volcanology professor at the University of Tokyo's Earthquake Research Institute. An estimated 100,000 cubic meters of lava has flowed to the surface since the eruption, according to Nakada, who observed the erupting volcano from an Asahi Shimbun aircraft.
"The volcanic activity level of Nishinoshima island is nearly the same level of that in 2014 when it was active," he added.
Brown smoke mixed with ash was tossed out of the ground intermittently and lava poured out near the top of the island's round vent, as well as at another spot.
The Japan Meteorological Agency announced the eruption on April 20 and warned it would likely continue for some time.
The Japan Coast Guard called for vessels in the vicinity to show vigilance.
Nishinoshima island, part of the Ogasawara island chain, has been slowly but substantially expanding after a series by eruptions that occurred from 2013 to 2015.