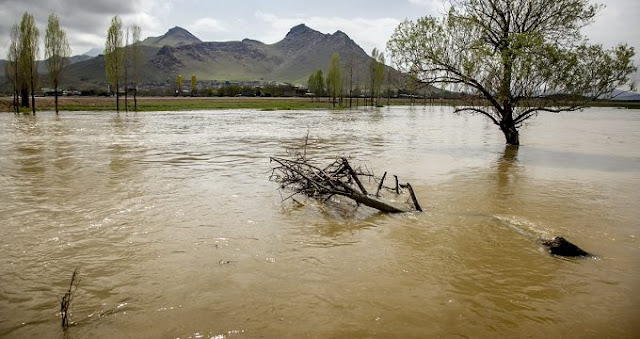 Photo theiranproject.com
Death toll in the landslide and flood in northwestern Iran has risen to 36, ANA news agency reports. According to the report, 30 out of the total number have been killed in the East Azerbaijan Province, one in West Azerbaijan and five in the Kordestan Province.
Heavy flood and landslide have killed at least 25 people in four provinces in northwestern Iran. Esmail Najjar, the head of the disaster management organization of Iran, has said that heavy flood and landslide have claimed at least 25 lives in the four provinces of East Azerbaijan, West Azerbaijan, Zanjan and Kordestan, ISNA news agency reports.
According to the official, at least 16 are missing following the disaster in northwestern Iran.
Najjar added that the East Azerbaijan Province with 19 dead has borne the heaviest loss among the other provinces hit by flood and landslide. Heavy floods have killed at least 18 people and injured 12 in Iran's northwestern province of East Azerbaijan, IRNA news agency reported Apr. 15.
The province witnessed the heaviest downpour of the past several years on Friday.
The counties of Ajab-Shir and Azar-Shahr suffered the heaviest damage following the disaster. Search and rescue operations are underway.