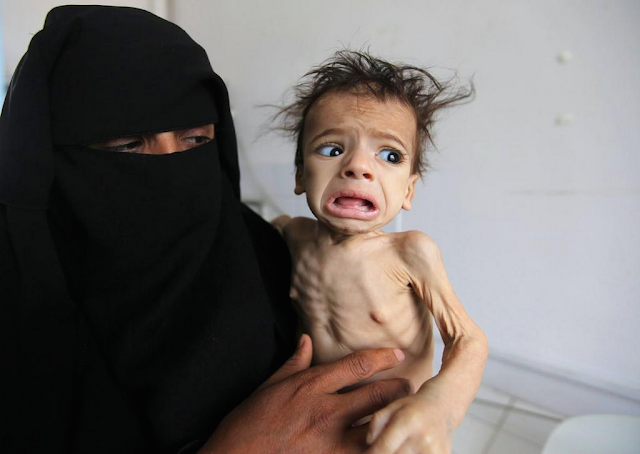 Photo HNGN.com
The world is facing its largest humanitarian crisis since 1945, the United Nations says, issuing a plea for help to avoid "a catastrophe".
UN humanitarian chief Stephen O'Brien said that more than 20 million people faced the threat of starvation and famine in Yemen, Somalia, South Sudan and Nigeria.
Unicef has already warned 1.4m children could starve to death this year.
Kenya, Yemen, South Sudan and Somalia are four countries facing incredible hardship and famine according to the UN who today have urged the international community for comprehensive action to save people from simply “starving to death.”
A senior UN official said that, about two-thirds of the population (more than 18 million people) in Yemen needed assistance, including more than seven million severely food insecure, and the fighting continued to worsen the crisis.
In South Sudan, where a famine was recently declared, more than 7.5 million people are in need of assistance, including some 3.4 million displaced. The figure rose by 1.4 million since last year, the famine in the country is man-made.
“We stand at a critical point in history. Already at the beginning of the year we are facing the largest humanitarian crisis since the creation of the UN,” UN Emergency Relief Coordinator Stephen O’Brien told the Security Council today.
Without collective and coordinated global efforts, he warned, people risk starving to death and succumbing to disease, stunted children and lost futures, and mass displacements and reversed development gains.
Similarly, more than half the population of Somalia (6.2 million people) is need aid, 2.9 million of who require immediate assistance. Extremely worrying is that more than one million children under the age of five are at the risk of acute malnourishment.
“The current indicators mirror the tragic picture of 2011, when Somalia last suffered a famine,” recalled the UN official, but expressed hope that a famine can be averted with strong national leadership and immediate and concerted support by the international community.
Concerning Kenya, he mentioned that more than 2.7 million people were food insecure, and that this number could reach four million by April.


“In collaboration with the Government [of Kenya], the UN will soon launch an appeal of $200 million to provide timely life-saving assistance and protection,” he informed.