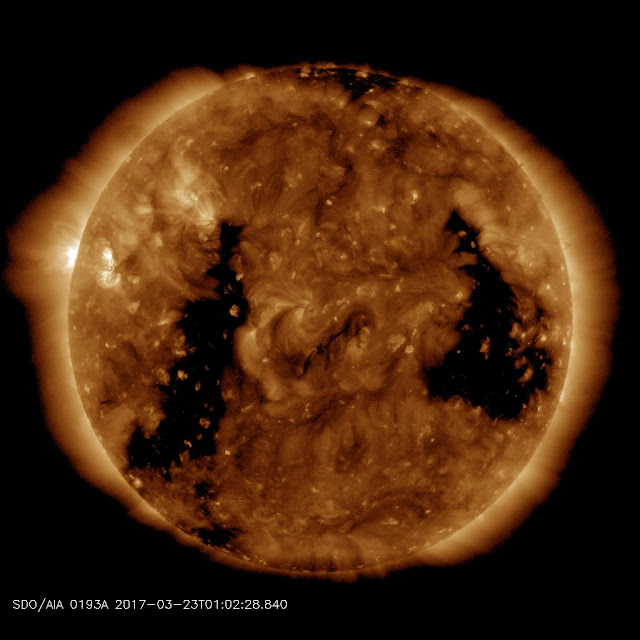 Photo SDO
With solar wind bombarding the earth’s magnetosphere at speeds of around 700 kilometres per second causing geomagnetic storms in the Earth’s magnetic field bringing wonderful auroras to the to Arctic, the massive coronal hole on the sun has begun to turn away from the Earth.
However another massive coronal hole is turning to face the Earth and this one is even bigger than the last.
The large coronal hole in the sun's atmosphere will swing into geoeffective position during the last week of March.
Solar wind flowing from the hole is expected to strike our planet's magnetic field and spark G1- to G2-class geomagnetic storms on March 28-29.
Regular visitors to The Big Wobble will be aware coronal holes are the main earthquake factor.
The dark patches sometimes covering more than half the entire face of the Sun indicate that the interplanetary magnetic field connecting Earth to our Sun will be experiencing huge fluctuations of energy, these huge fluctuations increase then decrease pressure on our planet causing major quakes and often volcanic activity.
So far March has only delivered 2 major quakes and we have had only 14 major quakes this year so we can expect some fireworks in the coming days.
Incidentally last year at this time we had had 29 major quakes more than double than this year.

Spaceweather.com reports: Today, Earth is inside a fast-moving stream of solar wind, which is expected to influence our planet until it leaves on March 25th.
The ensuing calm won't last long.
Another stream of solar wind is following close behind. G1- and G2-class geomagnetic storms are possible when it arrives on March 28th.
Arctic sky watchers should be alert for auroras next week.
A hole in the sun's atmosphere is spewing solar wind toward Earth and, as a result, the Arctic Circle is glowing with bright auroras.
More auroras are in the offing. Solar wind speeds are currently topping 600 km/s as Earth moves deeper into the gaseous stream.
NOAA forecasters estimate a 60% chance of polar geomagnetic storms on March 23rd