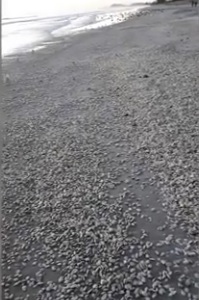 Most of the dead shellfish which washed ashore at Waihi Beach this week have now been removed. Local residents were shocked when they encountered "millions" of dead shellfish washed ashore on the northern end of Waihi Beach on Tuesday.
Jeanette McCallum believed they were pipi and posted a video of the finding online, sparking thousands of views and hundreds of comments.
She said today that most of the shellfish had already been washed away now but they had begun to smell "horrible" while they were there.
"It's amazing how the ocean manages to clean itself," she said.
A Ministry of Primary Industries said it was in discussions with the Bay of Plenty Regional Council about the incident but the cause of the mass death was unlikely to be known before next week.
She said the council had collected samples and couriered them to the ministry for disease testing, which was standard practice in mortality events such as this.
"It is important to rule out any disease cause," the spokeswoman said.
The samples were expected to arrive today and the ministry planned to run tests on them tomorrow, and will likely conduct testing on further samples early next week, she said.
"At this stage it is considered that flooding with freshwater is the most likely cause of the event.
This is not uncommon with flood conditions."
The spokeswoman also confirmed the affected shellfish were actually tuatua, not pipi.
"In terms of eating the affected shellfish, MPI recommends people leave them alone.
Standard health safety advice regarding shellfish is that you do not consume obviously sick or dead animals."
In a statement released this afternoon, the Bay of Plenty Regional Council said staff from the council and the University of Waikato will be analysing the shellfish for toxins.
Professor Chris Battershill, chairman in coastal science, said it was likely a number of factors contributed to the die-off. "
Apart from the weather bomb that hit the area last week, higher ocean temperatures are being recorded in this area and there have been some large sea swells," he said.
"It is also possible that this is a natural die-off due to stress from overcrowding as there is a very large population of shellfish densely packed just off the beach in this area."
Despite the huge amount of shellfish that died, Prof Battershill said there were many live shellfish within the wave zone.
The council expected to have some results within 3-4 weeks.