How long can the Pacific Ocean survive honestly? No one really knows with 300 tons of radioactive water leaking into the sea every day for the next 40 years 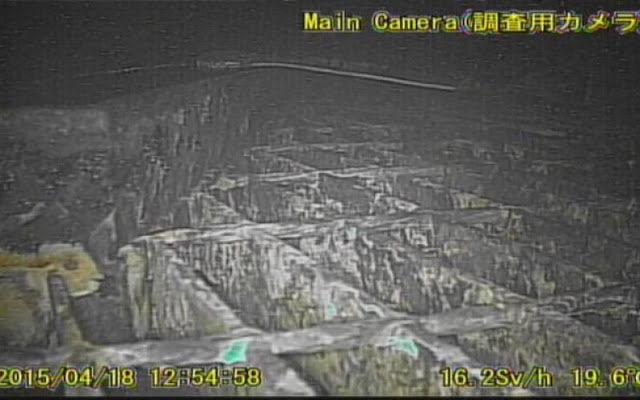 Emphasized by Gary Walton
A 'scorpion' robot sent into a Japanese nuclear reactor to learn about the damage suffered in a tsunami-induced meltdown had its mission aborted after the probe ran into trouble, Tokyo Electric Power company said Thursday.
TEPCO, the operator of the Fukushima nuclear plant, sent the remote-controlled device into the No. 2 reactor where radiation levels have recently hit record highs.
The 'scorpion' robot, so-called because it can lift up its camera-mounted tail to achieve better viewing angles, is also designed to crawl over rubble inside the damaged facility.
But it could not reach its target destination beneath a pressure vessel through which nuclear fuel is believed to have melted because the robot had difficulty moving, a company spokeswoman said.(All probability the high levels of radioactivity blinded the robot because these robots are designed to crawl over rubble)
'It's not immediately clear if that's because of radiation or obstacles,' she said, adding that TEPCO is checking what data the robot was able to obtain, including images.
A massive undersea earthquake on March 11, 2011 sent a huge tsunami barrelling into Japan's northeast coast, leaving more than 18,000 people dead or missing, and sending three reactors into meltdown at the plant in the worst such accident since Chernobyl in 1986.(Fukushima is going to be much bigger than the Chernobyl event and will in all probability destroy the Pacific Ocean)
The Japanese government said in December that it expects the total costs -- including compensation, decommissioning and decontamination -- to reach 21.5 trillion yen ($189 billion) in a process likely to take decades as high radiation levels slow operations.
The robot, 60 centimetres (24 inches) long, is made by Toshiba and equipped with two cameras and sensors to gauge radiation levels and temperatures.
'Scorpion's mission is to take images of the situation and collect data inside the containment vessel,' TEPCO spokesman Shinichi Nakakuki said earlier.'
Challenges include enduring high levels of radiation and moving on the rough surface,' he said. Radiation levels inside the reactor were estimated last week at 650 sieverts per hour at one spot, which can effectively shut down robots in hours.
But the probe -- designed to withstand up to 1,000 sieverts of radiation in total -- would not sustain severe damage because it was unlikely to remain for too long at a single point, Nakakuki said.
After a manually operated camera probed the deepest point yet within the reactor, Tokyo Electric Power Co (TEPCO) estimate that radiation levels inside the plant's No. 2 reactor have hit 530 sieverts per hour.(There are areas where the robots still can't reach where the radiations levels will in all probability be much higher)
Radiation exposure at 530 sieverts per hour would effectively shut down TEPCO's planned robot camera probe in under two hours.
TEPCO said the radiation is not leaking outside the reactor. (This is a strange comment from TEPCO considering 300 tons of radioactive water is leaking into the Pacific every day)
The previous record at Fukushima was 73 sieverts per hour detected by sensors in 2012, TEPCO said. But TEPCO said the high reading focused on a single point with levels likely to be much lower at other spots (However there are other areas the robots can't reach which are probably much higher than 500 hundred sieverts per hour).
It's been over half a decade since Japan's Fukushima Daiichi nuclear power station suffered a catastrophic meltdown which topped the International Nuclear Event Scale due to its severity. Radiation loves to hang around, and researchers conducting operations with robots inside the damaged reactors were met with radiation levels at their highest point since the actual meltdown back in 2011.
In fact, the radiation level is so elevated that the robot operators had to quickly recall one of their robotic probes because it began to literally go blind.
Like sending a rover to another planet, the mission for robot operators from the Tokyo Electric Power Company (TEPCO) is to monitor the status of the failed reactors and the nuclear materials housed within.
Unfortunately, the radiation level of the reactor units was high enough to actually begin to damage one of the robots' camera system, and could have completely blinded the view for the operator and left the bot stranded in the radioactive hellscape. (In layman's terms what the are saying here is no technology has yet been invented to fix the problem, humans or robots can not get anywhere near the rector long enough to fix the problem so TEPO's claim it will take another 40 years to fix the problem is probably a very conservative guess)
However, TEPCO was able to study some of the readings taken by the robots before things went awry.
The scientists have estimated the level of radiation to be anywhere from 530 sieverts per hour to 650 sieverts per hour.
Those numbers are representative of the amount of radiation an object would expect to be bombarded with over a specific period of time.
To add a bit of scope to that, it's estimated that just one sievert will cause fatal cancer in approximately 5% of people, while a dose of five sieverts will kill 50% of people exposed to it within a month.
As little as 90 millisieverts (0.09 sieverts) accumulated over time can increase cancer risk in both adults and children. (With 300 tons of this stuff washing into the Pacific every day how long will it take before it kills the Pacific Ocean, it is a big ocean but not that big)
Later this month TEPCO plans to send yet another probe into the reactor to take additional readings and hopefully paint a clearer picture of just what exactly is going on inside.