Avian flu now tightening its grip in The U.S. as Kentucky is the 4th southern state to confirm the virus as world wide pandemic continues to grow 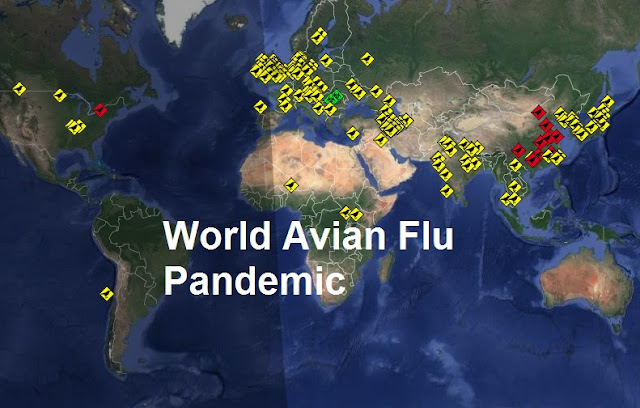 Click on RSOE Alert map to enlarge, red squares indicate humans infected or dead
Kentucky is the 4th southern  state to confirm avian flu as the virus tightens its grip in the U.S.
Bird flu is tightening its grip in the US as the virus has been confirmed in three more southern states after farms in Tennessee and Alabama reported cases earlier in the month, but officials say the nation's poultry supply isn't at risk.
The Kentucky Department of Agriculture said Tuesday that it's temporarily banning the transportation of poultry after a form of the disease was found in a commercial flock of 22,000 hens in western Kentucky. The state says the farm was placed under quarantine and the birds were killed.


The announcement came as the state of Alabama confirmed the presence of the same form of bird flu in two flocks there.
Another form of the poultry illness was previously detected in Tennessee.
Department of Agriculture specialists are investigating a possible case of avian influenza at a commercial poultry business in the Menlo, Georgia. The "bird flu" has not been confirmed. There is no danger posed to humans in this situation.