Alaska volcano Bogoslof in the Aleutian Islands spews ash cloud to 35,000 feet and threatens airliners between North America and Asia 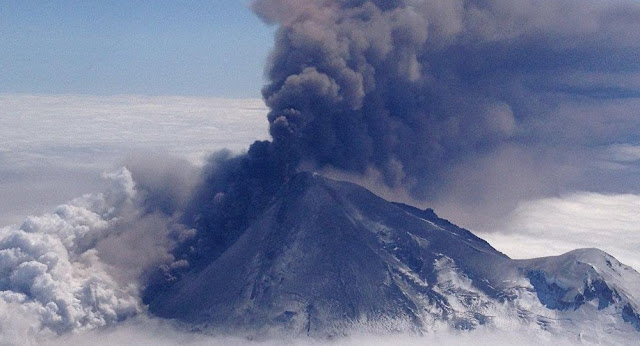 Photo Sputnik International
An Alaska volcano that's been active since mid-December has erupted again with an ash cloud that could threaten airliners.
The Alaska Volcano Observatory says Bogoslof (BOH-gohs-lawf) Volcano in the Aleutian Islands started erupting at 10:36 p.m. Tuesday and sent up an ash cloud to 35,000 feet.
The eruption was marked by seismic activity and lightning that subsided about 1:30 a.m. Wednesday. Ash can harm and stop jet engines.
Ash from southwest Alaska volcanos is a threat to airliners operating between North America and Asia when a cloud rises above 20,000 feet.
The observatory says the volcano spewed ash for about three hours.
The National Weather Service said trace amounts of ash could fall on the major fishing port of Dutch Harbor.