Two human H5N1 avian influenza cases recorded in Egypt: When people do become infected, the mortality rate is about 60% 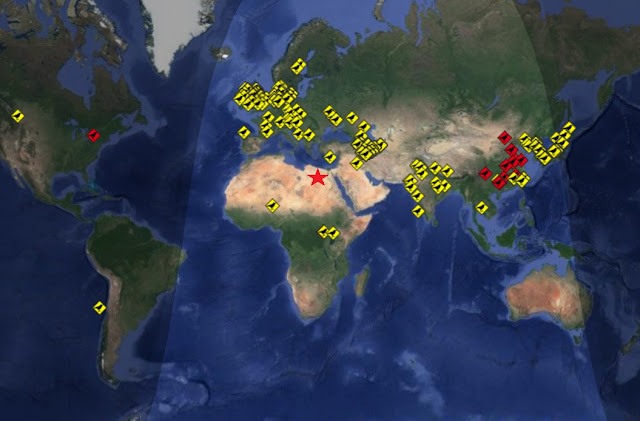 Click on RSOE Alert map to enlarge, red squares indicate humans infected or dead
The Food and Agriculture Organization of the United Nations (FAO) reported on their EMPRES system of two human H5N1 avian influenza cases today.
The first case was reported from Al-Minya, also spelled Menia Governorate in Upper Egypt.
The second case, which was fatal, was from Faiyum, a city in Middle Egypt.
According to the World Health Organization (WHO), H5N1 is a type of influenza virus that causes a highly infectious, severe respiratory disease in birds called avian influenza (or "bird flu").
Human cases of H5N1 avian influenza occur occasionally, but it is difficult to transmit the infection from person to person.
When people do become infected, the mortality rate is about 60%.
Almost all cases of H5N1 infection in people have been associated with close contact with infected live or dead birds, or H5N1-contaminated environments.
The virus does not infect humans easily, and spread from person to person appears to be unusual.
The number of confirmed human cases of avian influenza A(H5N1) reported to WHO since 2003 is 856, with 452 resulting in death.