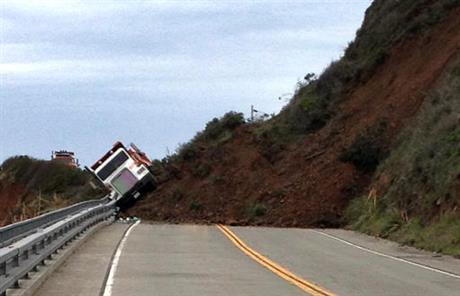 Photo Kron
San Jose city officials declared a local emergency Tuesday after record water flows from Coyote Creek submerged a neighborhood, with nearly 200 people rescued by boat from chest-high water.
A voluntary evacuation was issued for a swath of land along the creek in the northern part of the city, while some animals at Happy Hollow Park and Zoo were moved to higher ground.
A little farther south nearer to Anderson Dam, the source of the water flow, northbound Highway 101 between Morgan Hill and San Jose closed due to flooding. 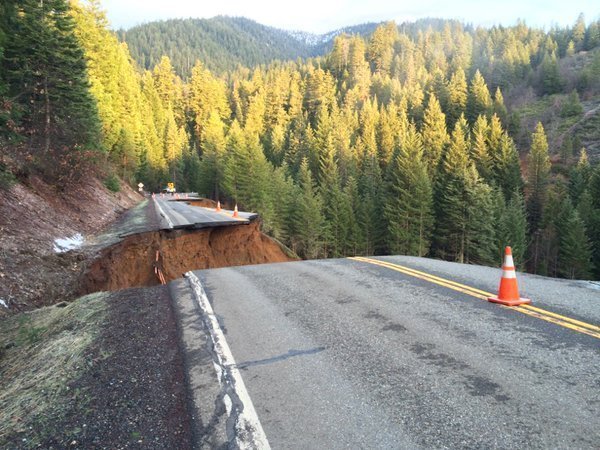 State highway collapses, hillside crumbles from Northern California storms - LA Times
By noon Tuesday, water was raging down Coyote Creek and was expected to surpass the highest flow rates ever recorded since 1950, when Anderson Dam, the main flood control project on the creek, was constructed, according to the Santa Clara Valley Water District.
The rain is expected to let up by Wednesday, with colder, drier weather forecast.
But temperatures could drop into the 20s overnight and the National Weather Service is tracking a "cool, wet, windy" weather system that will hit this weekend.
While it is not expected to be as strong as the the President's Day storm, it could still could bring "widespread impacts." 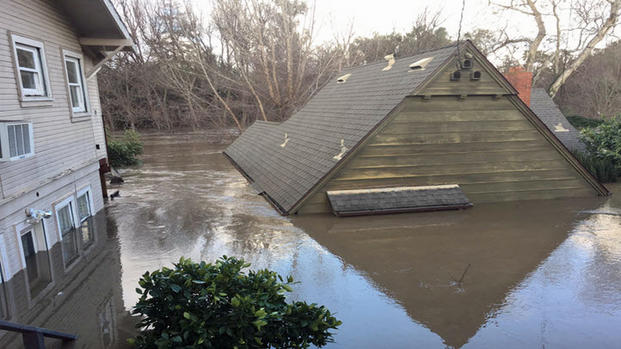 Photo NBC Bay Area Tuesday's emergency declaration occurred after the creek overflowed into a low-lying neighborhood near Senter Road and Phelan Avenue, resulting in the evacuation of 186 people from water that was up to four feet deep.
The flooding affected 500 homes, including many apartment units.
City officials urged a voluntary evacuation for residents living in low-lying areas along Coyote Creek, between Capitol Expressway and Interstate 880. Mayor Sam Liccardo said a "unique breach" of the Coyote Creek caused the flooding in the neighborhood at Senter and Nordale.
He said San Jose Water Co. has been asked to pinpoint the location of the breach.
"We've got all hand on deck right now," Liccardo said at a press briefing. "Everybody's doing everything they can to safeguard our residents." 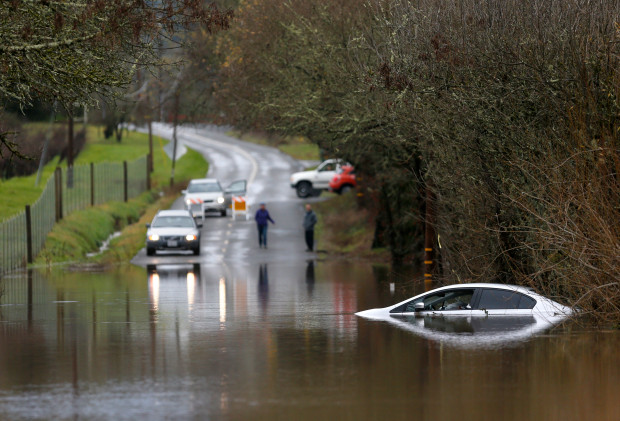 Photo EastBayNews
Evacuees were taken to shelters at the Shirakawa and Roosevelt community centers.
An overnight shelter was also set up at James Lick High School, which is on winter break.
By declaring a local emergency, city officials have the power to issue mandatory evacuations, according to city spokesman David Vossbrink.
City officials expect water levels in Coyote Creek to continue to rise throughout Tuesday and anticipate more residential flooding in low-lying areas along the creek.
Residents in a neighborhood near Senter and Phelan were rescued by San Jose firefighters.
Some vehicles were submerged, and firefighters were seen walking through waist-deep water.
The rescue effort turned into a mandatory evacuation.
Rescue crews used boats to evacuate six to 10 people a time.
Once on dry land, residents were sprayed down with clean water.
Firefighters have been decontaminating anyone with significant exposure to waters from Coyote Creek because "we don't know what's in the water."
City officials are operating evacuation centers at the Roosevelt Community Center, 901 E. Santa Clara St. and the Shirakawa Community Center at 2072 Lucretia Ave.
There is also an overnight shelter at James Lick High School, located at 57 N. White Rd.
Water district officials said that as the high water levels moved downstream, neighborhoods already showing some flooding Tuesday, particularly around Happy Hollow Zoo and Los Lagos Golf Course south of Highway 280, and the Berryessa area near north San Jose, would likely see more flooding. The reason for the historic water levels was that Anderson Reservoir, the largest reservoir in Santa Clara County, filled over the weekend to the top for the first time since 2006 because of relentless storms.
The water poured down the concrete spillway and into Coyote Creek, ending the dam's ability to act as a flood control regulator.
"Up until this storm we have had room in Anderson Reservoir to capture flood waters.
Now there is no more room," Grimes said.
"There's no more space for us to capture it.
A lot of rain has fallen on a very saturated watershed."
The waters were expected to peak this evening through midnight for much of Coyote Creek, although some places that have flooded in the past, such as Alviso, were coming through without significant problems due to flood control projects in the last two decades.
Guadalupe River in downtown San Jose, a waterway that historically flooded many times in past generations, stayed within its banks Tuesday as water poured into a concrete overflow channel near Santa Clara Street downtown that was constructed a decade ago.
Tuesday, San Jose police also ordered the evacuation of more than 300 Santa Clara County Social Services Agency employees working at offices at Senter Road, near Needless Drive.
Workers are in the process of being relocated to an alternate facility, and currently services are not available.
The torrent of water also flooded Highway 101 at Cochrane Road in Morgan Hill, closing all three northbound lanes at 9:30 a.m.
As water poured down the reservoir's spillway and into Coyote Creek, some also entered an abandoned canal that runs along the east side of the highway, and spilled over onto the roadway. Crews from the Santa Clara Valley Water District with excavators were looking to breach a section of the canal's levee further south so the water would flow back into Coyote Creek and away from the highway lanes.
The San Jose Fire Department initially received a report that as many as 20 people may have needed rescue.
Cal Fire sent a rescue helicopter to support the effort at the request of San Jose fire, Matlow said. Matlow said he did not have information on the condition of the people rescued.
They were apparently part of a homeless encampment along the creek.
In the East Bay, a flash-flood warning remained in effect for Carquinez Strait and Delta through Saturday morning, per the National Weather Service.
Officials are keeping a watchful eye on Niles Canyon, but so far there are no reports of any incidents. A tree came down on two homes in Danville, damaging their roofs, according to KTVU.
The "atmospheric river" storm that pounded the Bay Area on Monday delivered impressive rainfall totals throughout the region, including several records for Feb. 20, according to the National Weather Service. San Jose set a record for Feb. 20 with 1.87 inches of rain, according to the weather service. For San Jose, the 1.87 inches of rain marks the 18th wettest day in the city's history since records began in 1893, according to data provided by Golden Gate Weather Services.
Other locations with record rainfall on Feb. 20 include Livermore 2.06 inches, Moffett Field 1.83, Oakland 2.00, Salinas 1.72 inches, the San Francisco airport 2.16 inches and Santa Rosa 2.07 inches.