Deadly bacterial infection linked to rat urine in NYC kills 1 person with 2 seriously ill: First time a cluster of cases has been identified 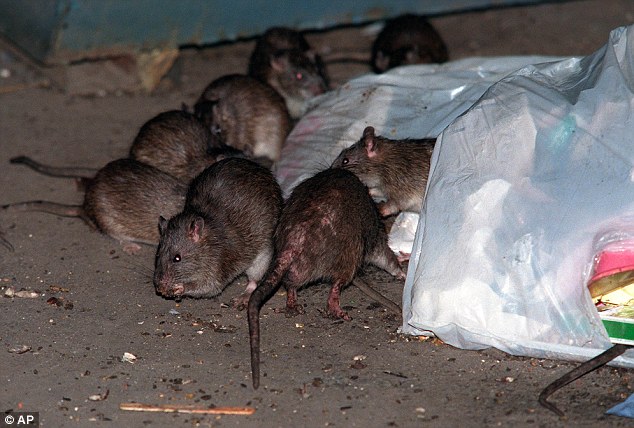 Photo AP
One person died and two more fell seriously ill after contracting a disease that commonly spreads through "contact with rat urine," according to the New York City Department of Health and Mental Hygiene.
The city's health department has identified a "cluster of three cases of leptospirosis" in one block of the Bronx, according to a statement the department emailed Wednesday to The Washington Post. "Leptospirosis is a bacterial infection that is most commonly spread by contact with rat urine and is very rarely spread from person to person," the statement said.
"This illness can be serious but is treatable with readily available antibiotics."
The New York Times reports that the city is investigating the matter.
Two people were diagnosed with leptospirosis in December, and another case was diagnosed in February.
Leptospirosis - which the health department also described as a "bacterial disease spread by animal urine, in this case by rats (not mice)" - is pretty rare in New York, according to the agency.
Typically, the city sees about one to three cases of leptospirosis each year.
As a letter issued Tuesday to heath-care providers noted: "Human leptospirosis cases are very rare in New York City; this is the first time a cluster of cases has been identified."
Some of those who become infected with leptospirosis suffer no symptoms.
Others, however, might experience symptoms that included a fever, chills, vomiting or diarrhea, the department said.
The New York Times reported that 26 cases of leptospirosis were reported in New York City from 2006 to 2016.
Of those cases, eight were in the Bronx, according to the newspaper.
All three patients from December to February suffered from "acute kidney and liver failure" and were hospitalized, the Times reported.
The two survivors are now out of the hospital.
The health department is working with housing and building officials, as well as building owners to try to deal with rodent infestations, according to the agency.
At a news conference Wednesday, Ruben Diaz Jr., Bronx borough president, called for calm in the wake of the news.
"There's no need for panic at this moment," he said.
"We have been in contact with the elected officials in the area, we've been in contact with the city. There's going to be some more education.
I think that what we need to do now is educate the public on exactly what it is that leptospirosis is." Diaz also said he frequently hears complaints about rodents and rats, and not just from those who live in the Bronx.
"This is, ladies and gentlemen, an issue that's a quality-of-life issue, it's a health issue," he said.
"And unfortunately what we've seen over the last couple days, it's a life-and-death issue."
The Department of Health and Mental Hygiene advised people to avoid contact with rats or places where rats might have urinated.
If someone comes in contact with areas where rats might live, the department suggests washing hands with soap and water afterward.
Home
at February 16, 2017