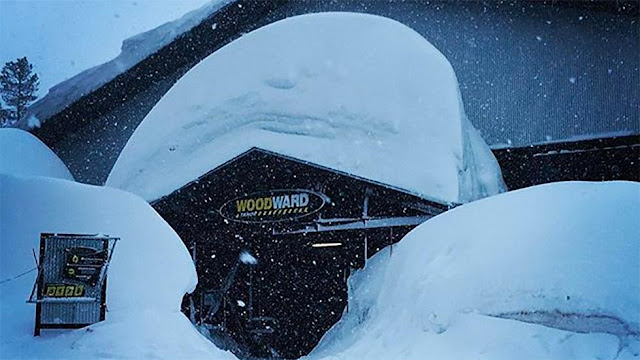 California drought over!  After a month of huge blizzards and “atmospheric river” storms, the Sierra Nevada snowpack, a source of one third of California’s drinking water is now at 177% of the historic average, the biggest in more than two decades.
We have to go all the way back to February 1st 1995 to equal the amount of snowpack now accumulated in the mountains.
It’s a breathtaking turn around after five years of punishing drought.
On Feb. 1, 2014, for example, the statewide Sierra snowpack was just 9 percent of the historic average, the lowest ever measured at that time of year and even worse than the dismal 1976-77 drought, when it hovered in the mid-20s.
More than 25ft of snow has fallen with a new round of storms set to roll into California bringing a further 3ft of snow by the weekend.
State officials though are reluctant to cancel the state’s emergency drought declaration from January 2014 until the full winter season is over.


50% of California is no longer suffering from drought although significant parts of Southern California and the San Joaquin Valley remain in drought.