A high tide of dead Jelly fish as far as the eye can see! Deception Bay beach Queensland turned into "bubblewrap!" 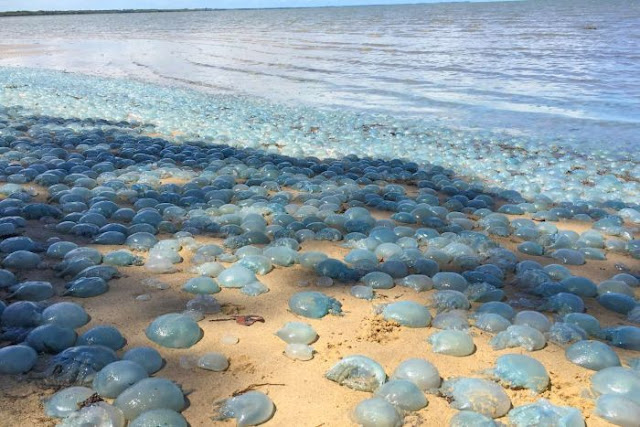 Photo ABC
No, that's not high tide, but a plague of jellyfish beached at Deception Bay in Queensland, Australia. Local Charlotte Lawson, who took the pictures on Sunday, said she's never seen that many jellyfish on the beach. 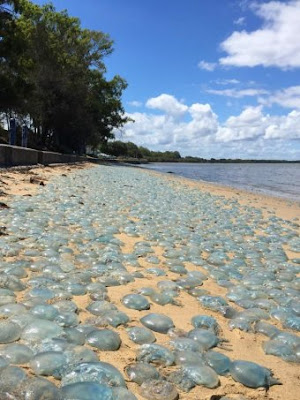 "It happens every year but there's never been this many, this year it's been heaps," Lawson said.
There was only a metre of sand between the jellyfish and the concrete," she said, estimating the jellyfish carpet was between four to six metres wide.
There was so many of them, it looked pretty cool - it looked like bubble wrap across the beach." Lawson said the jellyfish plague normally lasts about a week, but this year's lot could last a bit longer. "As the tide comes in they disappear but when the tide goes back out they're there," she said. "They're already starting to smell." The jellyfish are catostylus mosaicus - better known as blue blubber jellyfish - a type of mildly venomous marine stinger that often wash up on beaches in large numbers. While the blubber jellyfish won't cause swimmers any major pain, they can still hurt - if stung, Surf Live Saving Queensland recommends having a hot shower to treat any marine sting in south-east Queensland. The blubber jellyfish sting is not nearly as painful as another common jellyfish, the bluebottle.