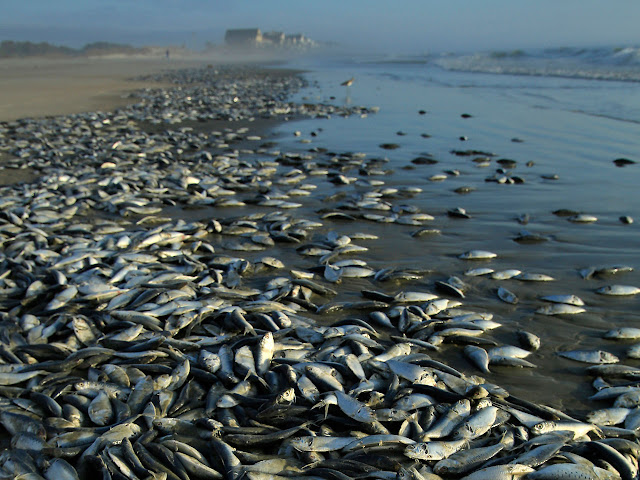 Photo CBS
An alarming report has been issued by the U.S. Secretary of Commerce this month enabling fishing communities in the US to seek disaster relief assistance after alarming decreases in fish and crab supplies along the West-coast of the US.
The  area covers Alaska to California and is extraordinary in the fact that the Secretary of Commerce has now openly admitted that marine life are dying in incredible numbers due to unusual ocean and climate conditions.
Readers of The Big Wobble are only too aware of the millions of species both bird and fish which have died recently along the West-coast of the US.
U.S. Secretary of Commerce Penny Pritzker has this month determined there are commercial fishery failures for nine salmon and crab fisheries in Alaska, California and Washington.
Report clarifies that loss of access, as well as large decreases in fish stock biomass, is due to unusual ocean and climate conditions.
In recent years, each of these fisheries experienced sudden and unexpected large decreases in fish stock biomass or loss of access due to unusual ocean and climate conditions. This decision enables fishing communities to seek disaster relief assistance from Congress.

Under the Interjurisdictional Fisheries Act and the Magnuson-Stevens Fishery Conservation and Management Act, the Commerce Secretary can determine a commercial fishery failure due to a fishery resource disaster, which then provides a basis for Congress to appropriate disaster relief funding to provide economic assistance to affected fishing communities, including salmon and crab fishermen, affected by the disaster.

If Congress appropriates funds to address these fishery failures, NOAA will work closely with members of Congress and affected states and tribes to develop a spending plan to support activities that would restore the fishery, prevent a similar failure, and assist affected communities.

Our sun is having a hissy fit! This is the main reason for climate change ..since it is the driver of all weather on our planet! Human reaction with our environment is minimal compared to our sun! He humans are not valuing our earth beauty and are trashing its splendour ...we must clean up our mess!!!

Israel was angry about Japan selling "Yellow Cake Uranium" to Iran ... Prophecy from many speak of "a man with a blue turbine nukes Israel and / or Western Civilization" ... Israel know this WILL HAPPEN. Lookup "Greater Israel Plan" & "The Sampson Option". "The Greater Israel Plan" - Basically America attacks and knocks down many countries that Israel now claims. "Zionist plans for expansion of what is called the Great Israel ... Plan to achieve full control over the Arab Peninsula which they intend to make an important part of the so called Greater Israel." Bush Administration planned to take out 7 countries in 5 years: Iraq, Syria, Lebanon, Libya, Somalia, Sudan, Iran (also Egypt, Afghanistan) Leaving America is a war debt 15 year Depression and Israel rich with oil to sale to China, etc.
The "Samson Option" is the name that some military analysts and authors have given to Israel's deterrence strategy of massive retaliation with nuclear weapons as a "last resort" against (Wrong; a "Kill Switch" where 2500 Nukes go off against 2500 targets including America) a country whose military has destroyed much of Israel. Wikipedia