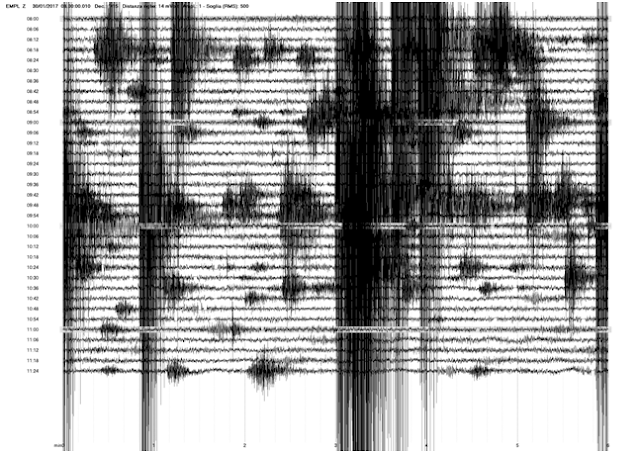 Seismogram recorded at the seismic station of M. Parmentelli where there is clearly  currently the most intense seismic swarm in progress Etna. Photo Ingv.


It’s the second biggest volcano in Europe and Northern Africa! Activity on Mount Etna Volcano, Sicily, Italy intensifies as it registered more than 60 tremors on Monday morning - the most significant measuring at least 3.5 magnitude.

Schools in Sicily were evacuated on Monday after the island's active volcano, Mount Etna, experienced a flurry of quakes.
Seismic experts at Italy's National Institute of Geophysics and Vulcanology (Ingv) registered more than 60 tremors on Monday morning - the most significant measuring at least 3.5 magnitude, at 10:51am.
The quakes began shortly after 6am, and five have measured over 3.0 in magnitude.
Local authorities have alerted residents to the series of tremors, which have had their epicentre between Ragalna and Monte San Leo, at around 14km deep.
Ingv said there was "nothing unusual" about the volcanic activity, and there have not been any reports of damage to buildings or any injuries caused by the quakes.
In the towns of Ragalna, Nicolosi and Bronte on the south side of the volcano, schoolchildren were evacuated on Monday morning as a precaution.
Etna, nestled between the cities of Messina and Catania, is Europe's most active and highest volcano and Italy's highest peak south of the Alps.
Together with Mount Vesuvius near Naples, it is one of 16 volcanoes in the world designated as 'Decade Volcanoes' by the UN, which means that they are studied particularly closely due to the frequency of activity and density of nearby population.
It is in a near-constant state of activity, and striking video footage from the past week shows the snow-covered peak sending out clouds of smoke.

Hello Author! I am extremely glad to read this tremendous content which really got me impressed and my daily target is to find out unique subject for getting knowledge. How To Obtain An Honorary Doctorate. Kindly excellent archive shared with us.