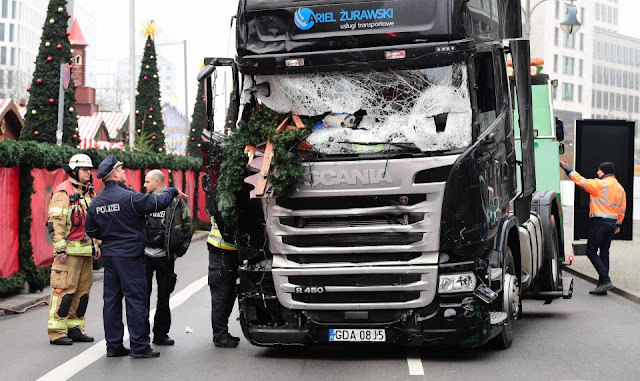 For months and months the European people warned their politically correct, fair, free Western democratic, socialist leaders not to let in millions of refugees from Syria, Afghanistan and other Muslim countries, not because they hate Muslims or because they are racists no, Europeans in general are fair tolerant people, no they knew that for every 100 genuine refugee’s allowed across our borders at least ten more would be a terrorist and would commit murder on European soil. If the kind tolerant citizens of Europe knew what would happen by letting in waves of asylum seekers into our countries why did our jelly bellied leaders not know? Well of course they must have known but they chose to ignore the threat and worse still the elected leaders arrogantly refused to listen to their electors.

So you see, it’s not just the terrorists to blame for all the deaths in France, Germany and Belgium in recent months but also the politicians who willingly let these demonic people into Europe without so much as a passport control, what our leaders have done here is nothing less than murder and it’s just the beginning but wait, worse still, Brussels wants to keep open their borders for these killers to enter and I myself couldn’t understand as to why until now.

The phoney loveleyism of Western democracy may seem the true way for a perfect peaceful world but that will only work if all parties are singing from the same hymn sheet, your average jihadi doesn’t crave a perfect peaceful world, he or she craves, death to all who doesn’t worship their evil god, and of course even our puffed up libtard politicians know this but care to ignore it because flooding our streets with poverty class refugees will bring millions of more votes for their socialist agenda which is exactly the very same tactics Tony Blair used in the late 90’s when he allowed more than 2 million asylum seekers into the UK so he would gain more votes. So you see, We have been tricked once again by the very people who should have our interest at heart, they pulled on our strings telling us how compassionate we should be for these poor souls all the while, knowing they had deceived us and knowing they would bring murder…Perhaps Brexit and President elect Mr Trump will be the down fall of the left-wing establishment!

Absolutely correct. Those who endorse and encourage criminals to migrate are as guilty as the ones committing the crimes. It's a major NWO conspiracy.

In addition, significant tensions will arise between the native citizens and immigrants from foreign countries, who as a rule also observe religious beliefs different from those of the native populace. And in the end, this will lead to severe conflicts. Hatred against strangers, foreigners and people of different religious beliefs will be the order of the day, as well as the rise of neo-Nazism, terrorism and right-extremism. Conditions similar to civil war will be in England, Wales and Northern Ireland and claim many lives.

...
Monstrous forces will be created by science and will be released by the military forces and armies as well as by terrorists, causing great destruction. Millions and even billions of people will be killed by acts of terrorism, by wars and civil wars; and finally, in some parts of the world, every third human being, and, in other places, every fourth human being, will lose his or her life. The nations of the East will rise against the nations of the West, the West against the East. Many deaths will be inflicted upon the people by fighter and bomber aircraft, and bombs and rockets will destroy and annihilate smaller and larger villages and cities.
...
However, this will not be all of the horrors; as besides the genetic technology and the chemical weapons, far worse and more dangerous and more deadly weapons of mass destruction will be produced and will be used. The irresponsible politicians will unscrupulously exercise their power, assisted by scientists and obedient military forces serving them, who together hold a deadly sceptre and will create clone-like beings which will be bred in a total lack of conscience and will be scientifically manipulated to become killer machines. Division by division and devoid of any feelings, they will destroy, murder and annihilate everything.
The USA will set out against the Eastern countries ahead of all other financial states and simultaneously she will have to defend herself against the Eastern intruders. In all, America will play the most decisive role, when in the guise to strive for peace and to fight against terrorism she invades many countries of the Earth, bombs and destroys everything and brings thousandfold deaths to the populations. The military politics of the USA will likewise know no limits, as neither will their economic and other political institutions which will be focused on building and operating a world police force, as it is the case already for a long time [sic]. But that will not be enough, and, in the guise of a so-called peaceful globalisation, American politics will aspire to gain absolute control of the world concerning supremacy in economy.
http://theyfly.com/prophecies/prophecies.htm

Updating what Billy Meier first warned about in 1987, in an unofficial translation of an excerpt from Contact 642, on January 30, 2016, Ptaah told Meier that 17,461 people “directly connected with the IS and the al Qaida terror organization who should be described as so-called “sleepers had been identified” and had snuck into Europe with the flow of migrants:

Billy: “You have told me at our previous meeting on January 6 that you are about to clarify how many al Qaida and IS sleepers have sneaked in with the flow of migrants into Europe.”

Ptaah: This evaluation was carried out, in fact the investigation lasted until January 20, but we still continue on with it. We identified 17,461 persons that are directly connected with the IS and the al Qaida terror organization that should be designated as so-called “sleepers.

Billy: “Then Europe can indeed expect quite some acts of terrorism. But when I spoke and wrote that killers of the terror organizations IS and al Qaida are smuggled into Europe with the flow of migrants then it only earned laughter and the secret services even denied that this was the case.
http://theyflyblog.com/2016/04/20/billy-meier-17461-is-terrorist-sleepers-now-in-europe/

You Europeans have leaders that are traitors...we have them too but we are armed and aware of their treachery and are trying to regain control of our borders! Unfortunately for you...you have no borders! It WILL come down to ...are you man enough to rid your countries of your enemies of become Muslims yourselves...you are scwewed...sorry!