A massive coronal hole is turning toward the Earth on our Sun: Large quakes could be in the offing this week! 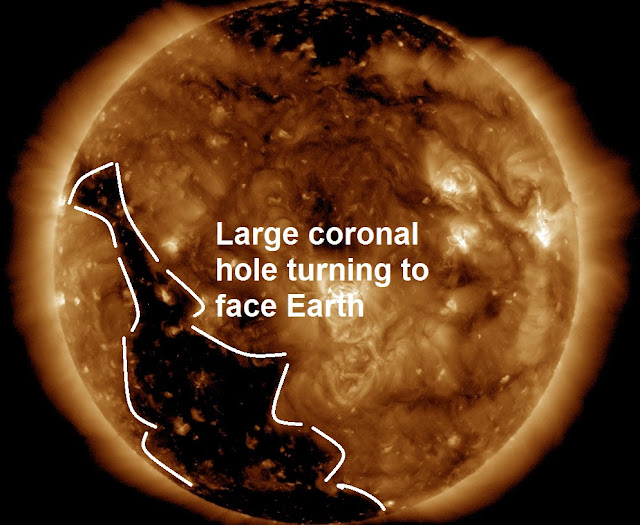 
A massive coronal hole on our Sun is turning to face the Earth in the coming days and is releasing solar wind which could reach Earth as early as Wednesday causing wonderful auroras.
Coronal holes are considered by many experts to be the primary factor for causing large earthquakes so keeps your eyes open and your ears peeled.

Spaceweather reports: LARGE CORONAL HOLE TURNING TOWARD EARTH: A large hole in the sun's atmosphere has formed and it is turning toward Earth. NASA's Solar Dynamics Observatory took this extreme ultraviolet image above of the structure on Dec. 4th:

This is a "coronal hole"--a region where the sun's magnetic field has opened up, allowing solar wind to escape.  A stream of solar wind emerging from this coronal hole could reach Earth as early as Dec. 7th and influence the near-space environment of our planet for several days. G1-class geomagnetic storms and high-latitude auroras are possible when the solar wind arrives.

The actions in space have an effect on what happens on the earth.A simple explainaition.is space is a movie projector and the earth is the picture.It could be devistating.Just like this massive blast of solar air.