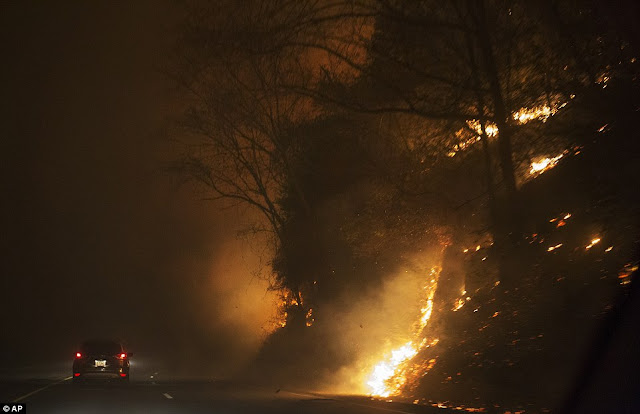 
The city of Gatlinburg and nearby communities are being evacuated due to wildfires.
Nobody is allowed into the city at this time.

The Daily Mail are reporting; Terrified guests are trapped inside a burning Hilton hotel as a huge wildfire engulfs the Tennessee resort towns of Gatlinburg and Pigeon Forge.
Dollywood theme park has been evacuated as thousands of tourists and residents fled the Great Smoky Mountains amidst reports of cars bursting into flames, dozens of homes being engulfed by fire, and the sky turning brown with smoke and flames.
Motorists clogged the roads after the Gatlinburg Fire Department ordered the mandatory evacuation of the town at just after 6pm on Monday, as strong wind conditions fanned the flames making the fire increasingly unpredictable and dangerous.
Meanwhile there are also fears for over 10,000 animals at Ripley's Aquarium of the Smokies, which is also surrounded by flames. The Sevier County Emergency Management Agency said if you are currently in Gatlinburg and are able to evacuate, evacuate immeidately and follow any instructions from emergency officials.

Three county school buses are available in Pigeon Forge for emergency transport and are being dispatched as needed to transport those who need to evacuate.
Gatlinburg residences are encouraged to evacuate using Highway 321 to evacuate.
Gatlinburg fire officials have declared an immediate mandatory evacuation of the Mynatt Park, Savage Gardens, East Foothills Road, Turkey Nest Road, Davenport and Ski Mountain areas.
Evacuation centers were set up at the Gatlinburg Community Center and Rocky Top Sports World. Great Smoky Mountains National Park officials reported fire activity at the Park Headquarters area and a spot fire between Elkmont and Newfound Gap Road off of the Sugarland Mountain Trail approximately 1 mile south of the Husky Gap Trail intersection.
The park has closed the Gatlinburg Bypass and Little River Road from Sugarlands Visitor Center to Metcalf Bottoms Picnic Area due to fire activity and downed trees.
The park has evacuated employees from the Elkmont and Park Headquarters housing areas.
The southbound lanes of the Spur from Pigeon Forge to Gatlinburg are also closed due to fire activity. "It's very dangerous weather conditions," said Dana Soehn with the National Park Service.
"We've had trees coming down, limbs coming down and the fire is continuing to grow."
Evacuation centers were set up at the Gatlinburg Community Center and Rocky Top Sports World. "Fire officials report that fallen trees have sparked multiple fires from fallen power lines," said Cindy Ogle, city manager for the city of Gatlinburg.
"Fire agencies from multiple agencies are responding to the area fires and I can't express enough the city's gratitude for the assistant with the National Park."

Worldwide natural catastrophes
As already mentioned, enormous natural catastrophes and rolling walls of fire and violent hurricanes will rage all across America, while, in addition, all the terrible effects of war will bring thousandfold deaths, destruction and annihilation. America's largest cities will be absolutely destroyed, and firestorms will cause great disaster and misery.
Severe earthquakes and volcanic eruptions will also belong to that time, and these will cause much suffering and misery and deaths besides enormous destruction and devastation, as all of nature and the planet itself will rise up against the insanity of human beings on Earth. However, tornadoes, earthquakes and volcanic eruptions will not only rage in America, but also in Europe and in the rest of the world.
These activities have already begun at the present time, also during the past decades—with the exception that they will become increasingly more devastating in the future. And man of Earth is guilty for the most part today, as also in the future it is man who will destroy the entire environment—all of nature, the atmosphere, water and all the resources of the planet.
And through this, a shifting of weight inside the Earth takes place, caused for example by the creation of gigantic lakes by damming and by creating hollow caverns due to the exploitation of petroleum and gas, etc. And thereby unnatural inner-Earth movements are created, which also lead to unnatural tectonic effects and cause earthquakes and volcanic eruptions, which also in turn cause enormous climatic changes, resulting in horrendous tornadoes of devastating proportions which in the end will set their destructive energies free on the entire world. All of this will lead to increasingly horrible floods and unusually massive snowfalls which will advance to the southern countries and finally even to the equatorial regions, because through the insanity of human beings the Earth has begun unnoticeably to spin [strangely] as a consequence of atomic explosions inside and on the surface of the Earth. And this will be the reason that the planet will slowly but surely enter an extraordinary spinning orbit around the Sun, while the first phase is already occurring, which causes a change in climate, leading to a new ice age.
http://theyfly.com/prophecies/prophecies.htm