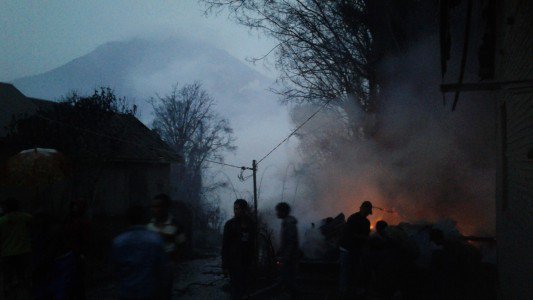 Eruptions at three volcanoes in Indonesia have darkened skies in parts of the archipelago and disrupted some flights.
Mount Rinjani in Lombok, West Nusa Tenggara, the Sinabung volcano in North Sumatra and Mount Gamalama in Ternate, North Maluku have all erupted in the past couple of days.
No one has been injured, but flights at two airports have been disrupted.
Sultan Babullah airport in Ternate was closed Wednesday and Lombok's international airport was closed for several hours on Tuesday.
The three mountains are among about 130 active volcanoes in Indonesia.
The archipelago of 250 million people is prone to earthquakes and volcanoes because it sits along the Pacific "Ring of Fire," a string of faults that lines the Pacific Ocean.
After seven months of hibernation, Indonesia's Mount Gamalama erupted on Wednesday, spewing ash 600 metres into the atmosphere.
Authorities closed the Babullah Airport on Ternate Island due to the volcanic ash.
A spokesman for the National Disaster Management Agency, Sutopo Nugroho, says Sultan Babullah Airport would remain close until 10 am on Thursday, reports AAP. The eruption followed an undersea earthquake which measured 4.6 on the Richter scale.
Indonesia, which sits on the Pacific Ring of Fire and home to 127 active volcanos, has been hit recently by volcanic eruptions.
On May 22, Mount Sinabung erupted anew, causing 10,000 residents to flee their homes and killing seven people.
On Monday, a volcano on Lombok, a resort island, caused the temporary closure of the island's international airport and cancelled flights from Australia to Bali.
A number of domestic and international flights to and from Bali were canceled on Monday following the eruption of Mount Rinjani in Lombok, West Nusa Tenggara.
Ternate Island, where Gamalama is located, belongs to the Maluku Islands in eastern Indonesia. Mount Gamalama's last eruption was in December 2015 when it disrupted economic activities in Ternate and closed the airport for two weeks.
Before that, the volcano erupted on July 16, 2015 at 9:58 am.
The volcanic ash it spewed then was higher at 1,500 metres into the sky, reports The Jakarta Post.