When space weather meets major seismic activity! I have been blogging major quakes and space weather since 2008 but I have never witnessed this before. . . A very powerful magnitude 7.6 earthquake rocks Indonesia at precisely 18:47 UTC—Just 3 minutes later at 18:50 our Sun launches a powerful X-Class flare from sunspot AR3182! Incredible! I have been blogging about quakes and spaceweather since 2008 but I have never witnessed this before. . .

This afternoon, a very powerful magnitude 7.6 earthquake rocked Indonesia at precisely 18:47 UTC—Just 3 minutes later at 18:50 our Sun launched a powerful X-Class flare from sunspot AR3182! I have never seen two powerful events so closely linked together before! I'm flabbergasted. . .

The powerful major quake, (mag 6 or higher) rocked the Pacific Ring Of Fire, the second in as many days. This one was a magnitude 7.6 struck Pulau Pulau Tanimbar, in Indonesia.

Seismic and Solar activity was expected. . .

Three days ago I told our readers to watch out for an increase in seismic activity after a Newly-emerging sunspot AR 3182 popped off an X1.2 flare in the early morning hours of Jan 6. Full story. Yesterday I warned Bill Laughing-Bear of incoming X-Class flares in the comment section here.

Well, today, exactly 3 minutes later than the mag 7.6 quake here on Earth was recorded, a new sunspot, AR3184 ejected another X-Class Flare from our Sun, how incredible is that? See the graph below. 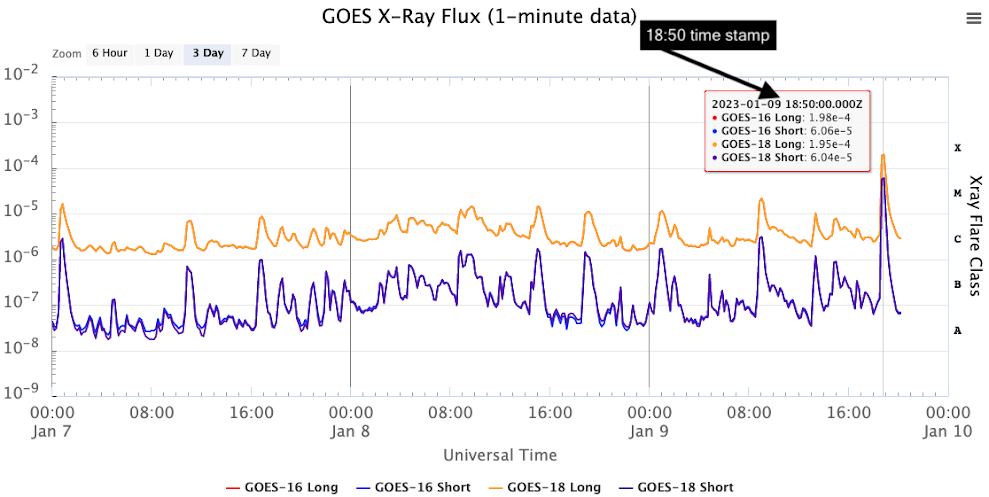 According to Spaceweather .com, Earth-orbiting satellites detected the X1.9-class solar flare (Jan. 9th @ 1850 UT), which just happened to be 3 minutes later than the mag 7.6 had rattled Indonesia. It is well known, sunspot activity, especially powerful X-Class flares cause seismic and volcanic disturbance here on our planet, however, I have never witnessed an X-Class flare and a major quake, mag 6 or higher so close together.

The source is hyperactive sunspot AR3184.  A pulse of radiation caused a shortwave radio blackout centred mainly on South America after the flare, a long way from the quake.

This 10-hour movie from NASA's Solar Dynamics Observatory captured at least half-a-dozen eruptions, most of them M-class: None of the debris plumes will hit Earth; the sunspot is not facing our planet. It will turn in our direction later this week. Meanwhile, amateur astronomers with solar telescopes should point their optics at the southeastern limb. It's where the action is.

We can certainly expect major seismic and solar activity in the coming days!