CreditNASA/SDO
Our Sun is very very active and continues to produce very strong explosions. Last night our Star popped off yet another X-Class Solar Flare from the new sunspot AR3186 late last night, the third X-Class Flare this week and NOAA predicting a 30% chance of another X-Class Flare in the next 48 hours. Active sunspots AR3181, AR3182, AR3184 and AR3186 are all showing very unstable 'delta class' magnetic fields and could be potentially dangerous.
According to Spaceweather.com; two more sunspots are coming. Helioseismic echoes reveal a pair of large farside active regions just behind the sun's eastern limb. They will rotate into view later this week, adding their dark cores to an already very-spotted solar disk.
The sun produced another X-flare on Jan. 10th, this time from new sunspot AR3186. The movie [above] from NASA's Solar Dynamics Observatory shows the X1-class explosion hurling a plume of debris into space: Radiation from the flare ionized the top of Earth's atmosphere, causing a shortwave radio blackout over the South Pacific. This is the 3rd X-flare in a week, and each flare has come from a different sunspot. It's not just a single active region; the *whole sun* is becoming more active. NOAA forecasters say there is a 30% chance of another X-flare on Jan. 11th. 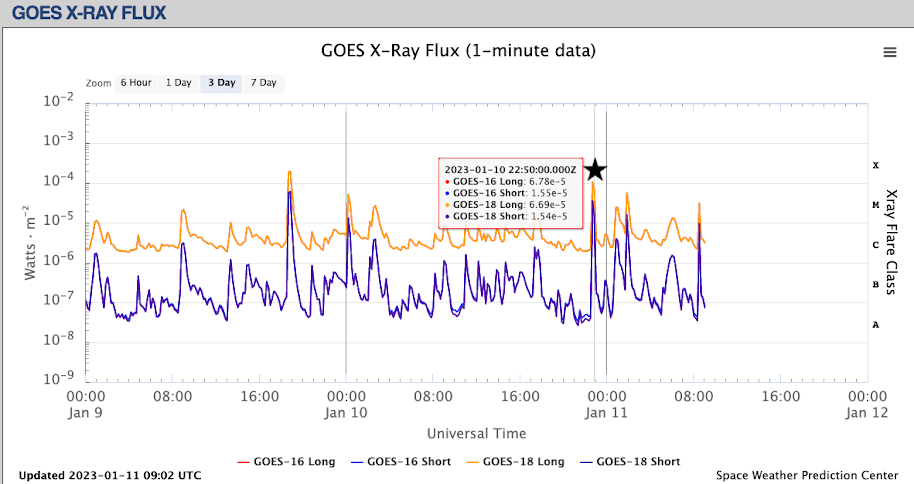