A century ago, their population was estimated at 1.5 million; in 2020 less than 70,000 remain with an ongoing decline of 3–4% per year! Around 2,500 endangered seals have been found dead on Russia’s Caspian coast in the North Caucasus, local officials said Sunday! 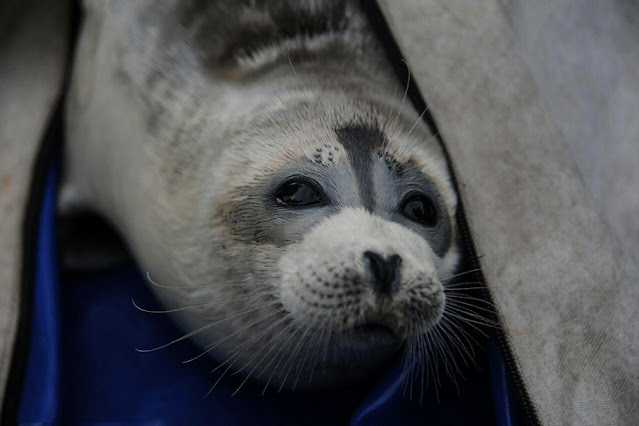 Caspian Seal, credit Wikipedia.
About 2,500 seals have been found dead on the Caspian Sea coast in southern Russia, officials say. Officials say there is no sign that they died violent deaths. Some 700 dead seals were initially reported, but further investigation has revealed a much higher number and counting continues.

Caspian seals, the only mammals found in the Caspian Sea, have been classified as endangered on the International Union for Conservation of Nature (IUCN) red list since 2008.“The number of discovered animals may increase. The cause of death has yet to be determined,” the press service for the region’s fisheries agency said, according to Russian state media outlet TASS.

The seals washed up on the coast of Russia’s republic of Dagestan, along the Caspian Sea, the largest landlocked body of water in the world.

TASS said, “researchers had already started working on identifying the cause of the mammals’ deaths.”The news comes after more than 140 Caspian seals were found dead on Kazakh beaches of the Caspian Sea earlier this year, according to KASPIKA, an agency for the conservation of Caspian seals.

According to the IUCN, the Caspian seal population has suffered from overhunting, habitat degradation and climate change. The Caspian Sea is bordered by five countries: Azerbaijan, Iran, Kazakhstan, Russia, and Turkmenistan.

Several recent cases of large numbers of Caspian seals dying due to canine distemper virus have been reported, in 1997, 2000, and 2001.

In April 2000, a mass die-off of Caspian seals was first reported near the mouth of the Ural River in Kazakhstan. It spread south to the Mangistau region, and by the end of May, more than 10,000 seals had died along the Kazakhstan coast. High death rates were also recorded in May and June along the Apsheron peninsula of Azerbaijan and the Turkmenistan coast—Wikipedia.

Oh! It's always a virus that's killing life forms globally! So over it! A virus as described in my Websters 1980 dictionary is: poison. (First word used to give a definition). Next (2) it says dead cell excrement as definition of virus.

Poison kills cells, cells excrete their outer shell in an attempt to heal itself, the cell. That makes sense and it is said reason for flu and cold like symptoms, until the body can get it all out.
So, if that is true then how can any said virus be transmitted or caught if it's not alive, but dead? I'm thinking the whole virus mantra is one big bag of bull shit!

Anyway, look at the sentence saying, these seals have been declining due to "over hunting, habitat degradation, and CLIMATE CHANGE". Climate change is their word for geoengineering. Meaning, the seals are dying from geoengineering poison! That's what is really going on I'm sure. So sad to keep seeing these wildlife deaths and extinctions.