Round Two Has Begun Of The New World Order's Attempt To Vaccinate The World! More than 200 million Chinese people in lockdown as the Communist Party rolls out draconian new restrictions despite just a handful of cases. 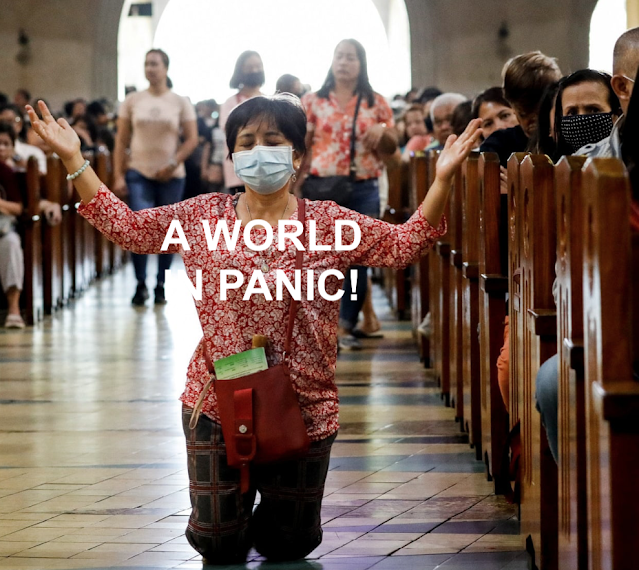 Just last week, a new report concluded the virus that causes COVID-19 has a unique "fingerprint" indicating it originated in a laboratory rather than in nature, and that laboratory was the one in Wuhan and that unique fingerprint belongs to a Dr Anthony Fauci. Full story
So it may not come as a shock to learn Wuhan lockdown, version 2.0 has arrived, even though China has not recorded a single Covid death since May and is probably coming to a city near you in the not-too-distant future. Be prepared for the "BOOSTER!"
In a move mirroring what happened almost 3 years ago, China has plunged 210 million people into lockdown as two “highly contagious” strains of Covid-19 threaten to cause an outbreak in the nation. More than 200 million people are facing a fresh lockdown in China as the Communist Party rolls out draconian new restrictions despite just a handful of cases. Some 28 cities - including the virus’s ground zero Wuhan - are now under a wave of crippling new measures.

Data released to The Sun Online by economic analysis firm Nomura shows 208 million people are currently living under some level of lockdown in China. It is believed two highly contagious subvariant of Omicron - BF.7 and BA.5.1.7 - are responsible for the recent spike in cases. China officials have described the variants as “highly contagious” as they can also infect people who had been previously immune.

“According to government statistics and our survey, 28 cities are currently implementing various levels of lockdown or some kind of district-based control measures,” Nomura said. Nomura added the total number of people under restrictions has actually fallen from the previous week’s figures of 225 million. But the strictest of the lockdowns has actually increased and is now impacting 8.5 per cent of China’s GDP. The seven-day-moving average of cases also dropped from 1333 to 820.

Beijing officials however considered this relatively low caseload in a country of 1.4 billion enough to plunge millions into lockdown. More than three times the population of the whole UK is currently living under restrictions in China. Wuhan yesterday joined the 27 other cities after registering just 240 cases over the last two weeks. The city was the site of the world’s first Covid outbreak - sounding the alarm to the World Health Organisation on December 31, 2019. The outbreak then spiralled into a global pandemic that has so far killed more than 6.5 million people and infected 635 million.

Beijing is taking a no-tolerance approach to the virus - enforcing the new rules after just 20 to 25 new infections a day this week. Chinese leader Xi Jinping - who was this week made “Emperor for Life” - is continuing to roll out what has been dubbed as the “world’s strictest lockdown”.

Cops wearing hazmat suits and wielding machine guns have been brutally enforcing the rules. Quarantine camps, food shortages. cops seizing people’s homes, tags on Covid patients, and drones policing the streets have all been seen across China. And yet the caseload in China is claimed to have been comparatively low throughout the entirety of the pandemic. The most they ever suffered was on February 12, 2020, with 14,108 new cases - and the most they faced this year was 5659 on April 29.

China’s draconian response to the virus has raised the spectre of a return to the potential for rising cases around the world as we head into the winter months. But the West has rolled out much more effective vaccination programs, making countries better equipped to deal with any spikes in infections. China appears to be pursuing a national policy of self-isolation as the Communist Party have made Covid Zero its flagship plan. Xi doubled down on the policy in a recent speech - and vowed all measures are due to stay for the foreseeable future.

He has claimed his plans are about saving people’s lives. China has not recorded a single Covid death since May - and from April 2020 to April 2022 it only recorded six deaths. Is this a sign of the success of Xi’s policies, or a sign of the Chinese state’s overreaction?

Wuhan was the guinea pig as China pioneered the idea of “lockdowns” - with the 76-day shutdown becoming the template followed by cities from London to New York to Melbourne. Xi’s refusal to abandon his plan has been credited with causing deep economic damage - and for stoking rare open unrest in China. Covid Zero has been described in some reports as a “trap of its own making” for the Communist Party.

Virologist Jin Dongyan, from Hong Kong University, told The Washington Post: “If they open up now, there will be a major outbreak immediately.“However, even if they do not open up, a major outbreak will sooner or later arise somewhere.” The scientists added the approach is “not sustainable” and “someone has made the wrong judgment”.“They wrongly assessed the situation in the world, and they cannot come out from their own comfort zone,” he said.

It was suggested the latest Covid cases in Wuhan could have been linked to the sale of meat. And this matches with the theory that may have first emerged from Wuhan’s now-infamous Huanan Seafood Wholesale Market. The first cases of the virus were centred on the wet market in downtown Wuhan which was packed with live animals for sale.

It is suggested the virus could have jumped from one species to another before then mutating to infect humans. Some have cast heavy doubt on this theory, however - instead pointing fingers at the Wuhan Institute of Virology (WIV). WIV was home to various bat-based coronaviruses, and it’s been suggested the infection could have escaped or been carried out by a sick worker. China has always angrily denied these allegations - and the true origins of the virus remain unknown.“I don’t know what to do. If we can still survive living like this then I suppose that’s what we’ll do,” one Wuhan resident told Reuters. “When we see these news stories about Covid, we now feel a bit numb. We feel numb to it all.“We feel more and more numb.

”Wuhan was not the only new lockdown in China - with Guangzhou also being sealed up. People were ordered to stay home in areas that were deemed high risk of Covid resurgence. Guangzhou resident Lily Li, 28, said: “Many of my friends and co-workers have been under lockdown at home.“The situation is still unstable. Many places are under lockdown. Classes have stopped and entertainment venues have been suspended too.”And meanwhile, in Xining, there have been reports of food shortages and skyrocketing prices.

Other recent Covid outbreaks in China have seen the cities of Datong and Xi’an put under new measures. Beijing attraction Universal Studios Resort was also shut down due to a single Covid case, and there were viral cases at a factory in Zhengzhou which makes iPhones.“Once there’s a case somewhere, and then you become a close contact, you’ve got to be in quarantine,” said Beijing resident Wen Bihan, 26. With a total of 28 cities under some measure of lockdown - this is impacting a region responsible for $3.5 trillion, or 25 per cent, of China’s GDP. It stokes fears that Xi’s ruthless Covid Zero policies could be the doom of his nation china has recorded a total of 258,000 Covid cases and just over 5000 deaths - a small number compared to other nations. There has been major scepticism about China’s figures - with numerous reports suggesting the Communist Party covered up the true extent of the giant nation’s outbreak.

Greetings to all!
Reading this post made me think of my situation here in SWFL since hurricane Ian ripped us apart. Hubby and I were just saying how "funny" it is that during all this pre and post storm activity, with people in close quarters hunkering down and now bunking with each other due to losing homes, that isn't it something how not one covid case has occurred or been reported by news?! Hmmm. Isn't that interesting?!
Also, with regards to suspicion that China has fudged their covid numbers, most likely it is true but those suspicions imply that numbers were fudged downward and are most likely higher....it may not be an accurate assumption.
In the covid mantra and my humble opinion it's more likely china's numbers were fudged upwards to validate that their commie lockdowns continue, my bet is the numbers are no where near what has been reported and are much lower if at all.
.
Unfortunately the governments of this world use numbers to suit their intended purposes, so we rarely get the truth. What brought this to mind this time was what a friend just told me a couple days ago. He has a friend in the coast guard. The coast guard and other military dept.'s were here the next day after the storm, and for 3 weeks after, but immediately they began looking for dead bodies from the air, flying over this island due to the storm surge flooding.
My friend told me his coast guard friend said the first day of search & rescue they pulled 500 dead bodies out of the mangroves along waters edges. News reports a total of 57 dead from the storm! That is quite different and for me the coast guard is most likely the true number. Our local officials do not want the world to know just how bad this storm was. Know that folks! Remember that!

Since the refugees began to move West from Ukraine when the war started, I noticed most of them were without masks! Any other time I could imagine families fleeing a war zone without a mask covering, but Feb 2022?—In the middle of a pandemic?
Just a week earlier, the world couldn’t go to the toilet without a mask on. I heard not one reference to Covid-19, not one while I was covering the refugee crisis!—Now, let me put that into some kind of perspective, since March, 2020 we have not been able to breathe without being warned of Covid-19, suddenly when war began—Nothing, zilch!

I actually saw Polish first responders walking around maskless. The thousands of maskless refugees were even more baffling when just a week before the Russian invasion, Ukraine reported more than 200,000 weekly cases of Covid-19 and the week before that more than a quarter of a million. According to those figures, 5 people in every 100 crossing the Ukrainian border has Covid? The whole situation must be a ticking time bomb! On Sunday, the 13th of March I watched a BBC report claiming kids, arriving in Moldova from Ukraine were turning up with “fever,” pneumonia, coughing, breathing problems and flu-like symptoms—There was no mention of Covid!

Hope you are doing better down there in SWFL Hawkeye!!! We continue to have you all in our prayers.

Thanks, KT, I hope you're well in your part of the woods!

Thanks Gary, We're getting along relatively well. Just waiting for the next hammer to drop. I'd love to send you pictures of the spraying they do in my area - can I send it along in your email?