Here is the latest update from Hawkeye after she survived Hurricane Ian's landfall, the deadliest hurricane to hit Florida State since 1935. She amusingly appears to be more worried about her pets than she is about herself! 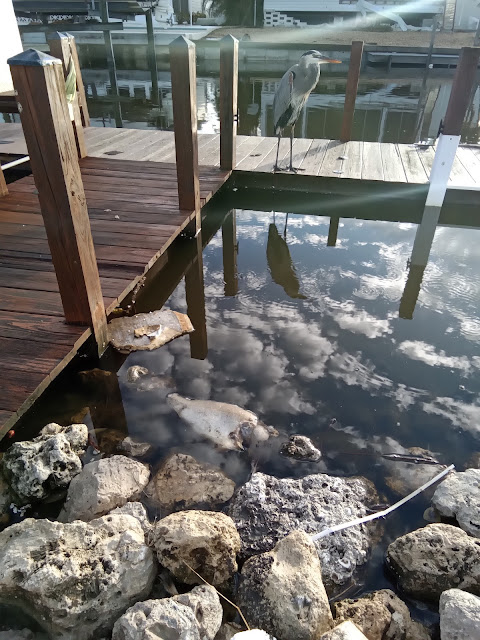 Here is the latest update from Hawkeye after she survived Hurricane Ian's landfall, the deadliest hurricane to hit Florida State since 1935. The Hurricane made landfall on Pine Island where Hawkeye lives, devasting everything around her.
It is so pleasing to hear from Hawkeye who disappeared from TBW radar three weeks after the hurricane struck in September.
She amusingly appears to be more worried about her pets than she is about herself!
[Dear] Gary, [and readers of TBW]
All of the short videos I wanted to send you are too big for my tablet so can't send them right now. I will try to find another way to get them to you.

Left. Meantime, here is one photo of dead fish in the Canal from gas/oil etc that went into the waterways. The birds remaining are starving and coming to occupied homes looking for food. This bird frequents my yard, I named him Bluebird. He is a Great Blue Heron. I'm feeding him, [and] a couple wood storks and my ducks. Remember I wrote about the ducks and the neighbours who killed many of them? One remained from that massacre, the one with the black head, a male, named him Buddy. The other 2 are females he brought to me before the storm. How they survived is miraculous. I'm feeding them too and leaving buckets of water out for all birds because there was a 4th duck with these 3 but he drank Canal water and died. So sad it is! 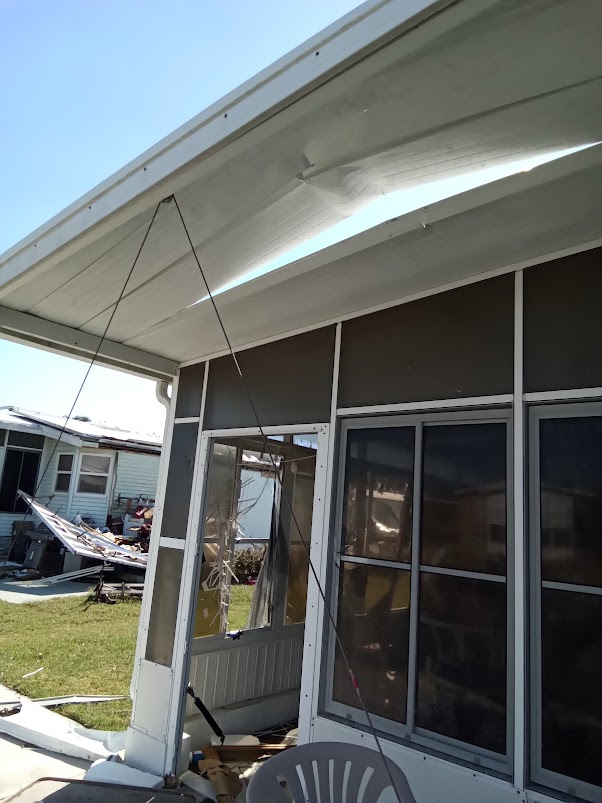 Above is what my lanai looked like after Ian. The picture of the white cabinet below is showing a brown line across the front... That is the waterline showing how high it was, about 4 ft! 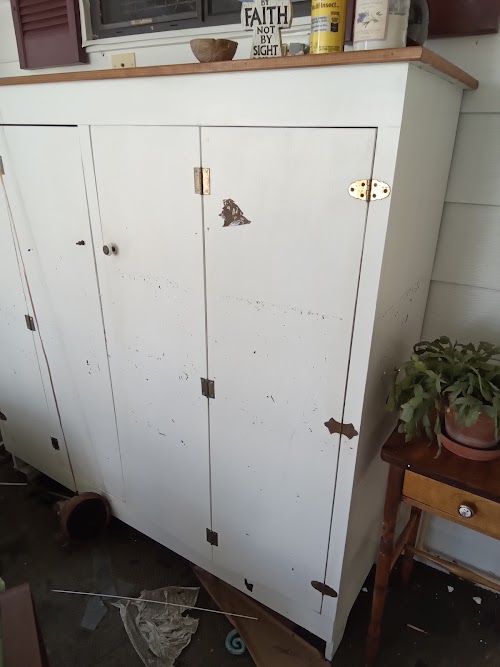 Three steps up to the interior living area I measured an 8-inch waterline on the walls. The back door was blown off, the roof was uplifted, windows were all blown out and the mess on the floor is from the water rushing in from the surge. 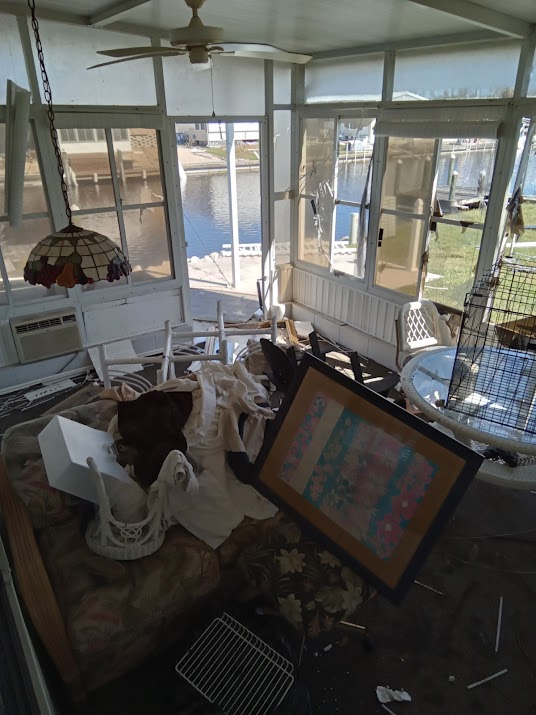 Internet is still not 100%, slow and difficult to send attachments so bear with me. I will have to send several separate emails to show many parts of the island.
Thanks so much for the opportunity to get this out to so many across the world! Really grateful for all you have done on my behalf!!
God Bless!
Hawkeye.

If you want to help Hawkeye and her Husband you can donate HERE in my (Gary Walton) coffee account. (PAYPAL) Make sure you mention the gift is for Hawkeye and not "Gary," and I will make sure she gets the money thanks—Gary.

DEAR HAWKEYE,
THANK YOU OF THE UP-DATE, ALASKA IS STILL PRAYING FOR YOU SISTER. WHEN I READ ABOUT WHAT HAPPENED TO YOU I GET THIS IMPRESSION THAT ADONAI, "GOD", IS NOT DONE WITH YOU AND HAS A PLAN.IT SAYS IN PSALMS 91:1-4,"YOU WHO LIVE IN THE SHELTER OF 'ELYON, WHO SPEND YOUR NIGHTS IN THE SHADOW OF SHADDAI, WHO SAY TO ADONAI, "MY REFUGE! MY FORTRESS! MY GOD, IN WHOM I TRUST!" HE WILL RESCUE YOU FROM THE TRAP OF THE HUNTER AND FROM THE PLAGUE OF CLAMAITIES; HE WILL COVER YOU WITH HIS PINIONS, AND UNDER HIS WINGS YOU WILL FIND REFUGE; HIS TRUTH IS A SHIELD AND PROTECTION.
AFTER THE FIRST OF THE MONTH WHEN MY V.A. PENSION COMES IN I WILL ADD A LITTLE MORE TO YOUR FUND.
BLESSINGS, JUST ME, LAUGHING-BEAR

Thanks Laughing Bear!! Funny, I have the same feeling!
When something like I have been through happens I think to myself God has allowed it to force big change in our life, changes that one would not have done otherwise. For our own good. In the blink of an eye your whole world is changed and this causes one of two reactions....you either turn to God or you get angry and turn against Him. So that is part of the reason He allows things that are seemingly very negative. There is a blessing in there some place and something really good will come from it. I know that in my heart but while it is occurring there are days you feel like screaming out, why Lord, why!?
Gary is right, I do care so much for my pets and the wildlife. I can not bear to see any beautiful innocent creature of God suffering from man's hand! The animals seem to know this of me because they come to me. Of course I will help them if only with a clean drink of water. They look so happy to find it in the yard and with such an enormous amount of debris scattered through out the ground, the birds do not want to wonder as they normally would. The ducks I care for will not leave my yard since they showed back up after the storm.
The first day after storm day I thought nothing about the dangerous conditions of massive amounts of trees and parts of buildings in the roads but only to get back to my place to check on the house itself and my bird friends. But first, being on foot I walked around the streets of my community to get to the homes of elderly people I knew stayed and did not evacuate. One street was knee deep in Pine tree branches. Another street had a huge piece of someone's roof blocking the roadway. There was still light rain falling, puddles in the street that had fish flopping in them gasping for oxygen. The storm surge brought the fish on land then went back out leaving them to perish on the blacktop. There were all kinds of dead critters littered in streets and grasses. Many that used to be around I have not seen back yet.
God has shaken things up causing big change on my life and every other critter and human who resides here. Some of it looks good while some of it appears to be unwarranted. There is misery and then all of a sudden there is such kindness I start to cry. Lots of emotions go through you in an experience like this. Getting it out is a big stress reliever! I thank Gary for that opportunity!
For you the reader, be grateful to read of my experience because there is a lot to be gained from it and it makes you realize what is really important and what is not. So I am grateful for the humbling it has bestowed upon me and that pushes fear out the door. Where is this all taking me? I don't know, but with great wonder I can't wait to see the answer!
But for right now, I just want to find a washing machine and dryer! Lol.... it's going to be awhile before any kind of normal returns I know that.
The next time anyone puts their clothes in the washer, or turns on the faucet, takes a hot shower or just makes a cup of coffee, think and thank God for it because you never know if it will be there tomorrow. The simple little automatic everyday things we take so much for granted are realized most when they are not there.
Love to all!
Hawkeye