If the incredible heatwaves of Summer 2019, here in Europe were an indication our weather is not quite acting as it should do, well Summer 2022 has blown 2019 away and made it look like a day out at Disney World! 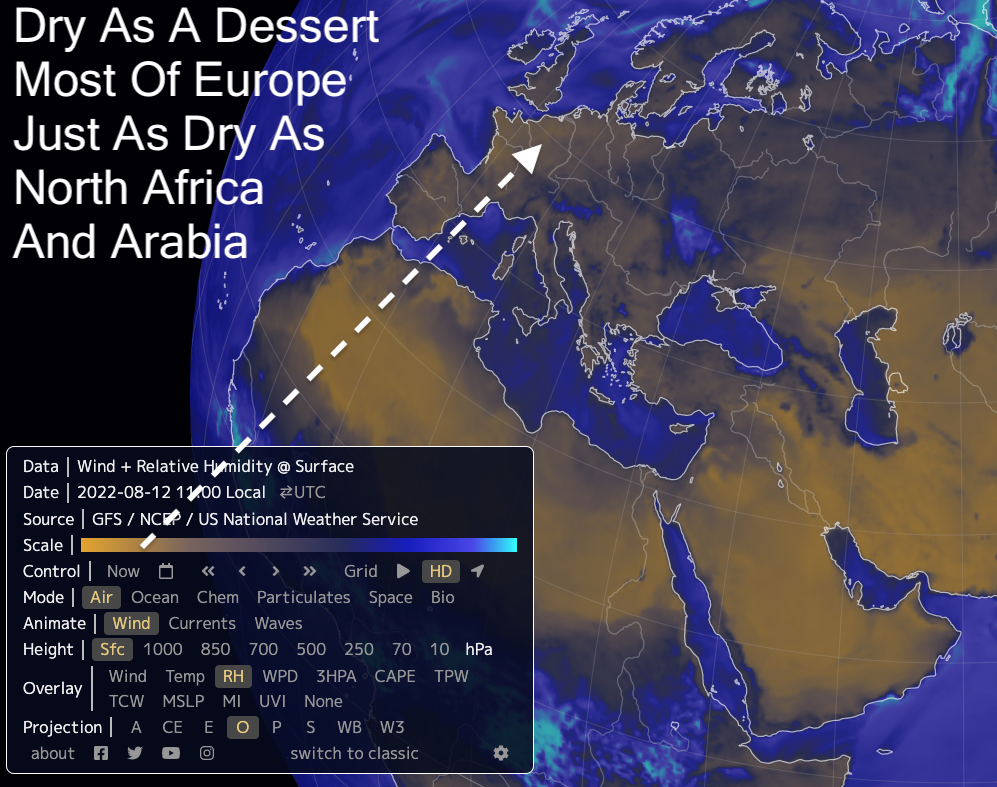 The wonderful Earthwindmap shows just how dry Ireland, the UK and Western Europe are today—Almost as dry as the Sahara Dessert!

Now before packs of organised shrills start jumping on my case and claiming climate change, global warming is bulls#it, excuse my French, and delivered by scientists using government-sponsored stats, well I agree with you, ignore them!

However, you nay-sayers, deniers, and sceptics, Our dear Lord gave you your own eyes and ears—USE THEM! Look around and wake up—Observe and take notice, our weather is not acting as it should be! The fires, heat, droughts and even floods are killing people, wildlife, agriculture—everything and are ramping up every day, week, month and year and if it carries on at this pace we will not be here to see the final consequence. (I believe in God wholeheartedly and believe we are in His hands but please, wake up to what is coming, prepare yourselves!)

Much of Spain is suffering drought conditions which have led to an incredible spike in wildfires—It is the same story in Portugal and France!
Reports of a“monstrous” forest fire that has devastated the southwest of France according to the European Drought Observatory. The forest fire has been raging in the Gironde department for two days. More than 1,000 firefighters are battling the “monstrous” forest fire in southwestern France that has already destroyed nearly 7,000 hectares of forest, authorities said. The fire near the city of Bordeaux destroyed several houses and forced 10,000 residents to flee. President Emmanuel Macron said that Austria, Germany, Greece, Poland and Romania have sent or will send aid to fight the fire. “European solidarity is on the march!” he tweeted. France and other European countries are seeing 'unprecedented' wildfires this summer, triggered by record temperatures and droughts across the continent. Some 1,700 deaths occurred in Portugal and Spain due to heat, the World Health Organization warned. 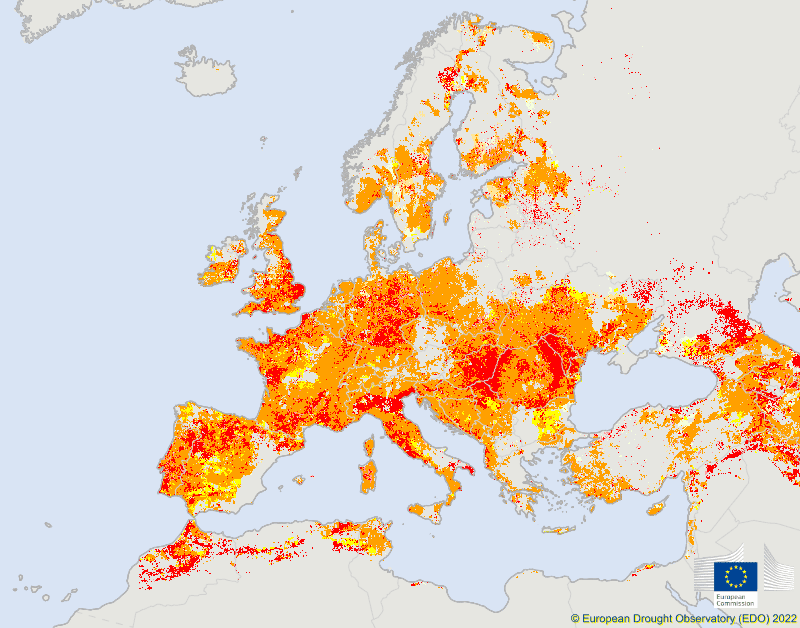 European Drought Observatory
Researchers at the European Commission have warned that nearly half of the EU's territory is currently at risk of drought, as southwest Europe wilts under a punishing heatwave. In a report for July, the European Commission's Joint Research Centre said that 46 per cent of the EU's territory was exposed to warning-level drought, with 11 per cent at an alert level, and crops already suffering from the lack of water. Italy was the hardest hit, with the Po River basin in the north of the country facing the highest level possible of drought severity, the EU said.
In Spain, water reservoir volumes are currently 31 per cent lower than the 10-year average, the report said, while in Portugal, water to produce hydroelectric energy is at half the average of the previous seven years. The EU researchers also warned that the lack of water and strong heat is driving crop yields lower in France, Romania, Spain, Portugal and Italy. Weather forecasts predict more of the same, the report said, adding to an already "very critical situation" that will exacerbate the effects on agriculture, energy and water supply.
Climate disasters cost Germany 80 bn euros since 2018
Report Weather catastrophes triggered by climate change have cost Germany at least 80 billion euros since 2018, a "horrifying" official study said on Monday, as disasters grow more frequent and intense. The report commissioned by the economy and environment ministries estimated the impact of drought, floods and extreme heat in Germany between 2000 and 2021 was nearly 145 billion euros ($147 billion), most of it seen in recent years. Since 2018 alone, damage to buildings and infrastructure as well as lost revenue in sectors such as forestry and farming in Europe's top economy reached over 80 billion euros. Environment Minister Steffi Lemke said the "horrifying scientific data" illustrated the "enormous damage and costs" of the climate crisis.
"The numbers sound the alarm for more prevention when it comes to the climate," she said in a statement. "We have got to and will invest more in climate protection and adaptation to protect our people." Economy Minister Robert Habeck, whose brief includes climate policy, said national measures would have to go hand-in-hand with accelerated global action to "keep the impact of the climate crisis at a bearable level." The study showed accelerated effects over time, with the abnormally hot, dry summers of 2018 and 2019 and deadly floods in the Rhineland one year ago recorded as particularly devastating. The 2018-2019 droughts were shown to have cost 34.9 billion euros, the floods an estimated 40.5 billion euros, and damage from severe storms another 5.2 billion euros. However, the authors of the study said their estimates were almost certainly too low as key factors, including health effects and the consequences for biodiversity, were not included. The report came as a heatwave engulfing parts of southwest Europe was expected to reach regions of Germany. Scientists blame climate change and predict more frequent and intense episodes of extreme weather. 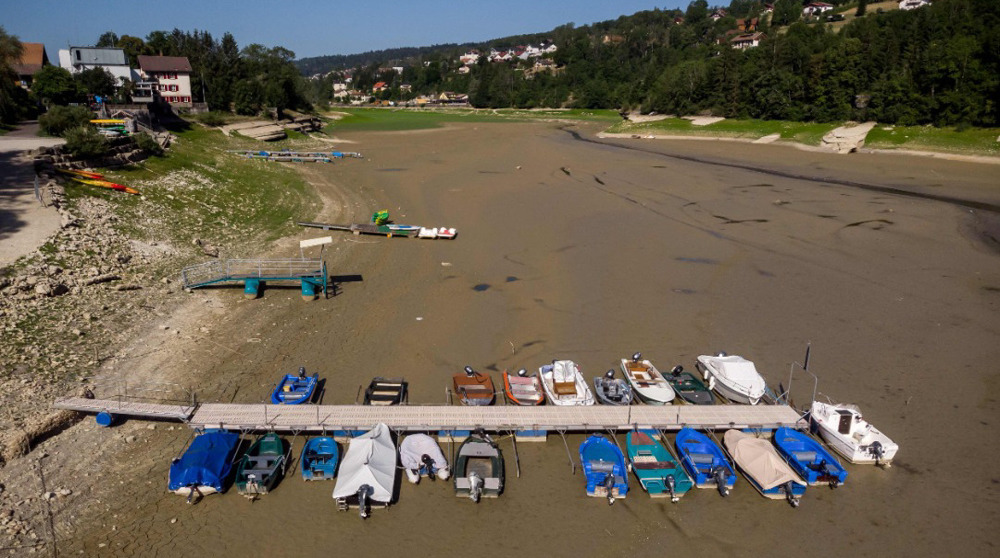 An aerial view shows boats in the dry bed of Brenets Lake (Lac des Brenets), part of the Doubs River, a natural border between eastern France and western Switzerland, in Les Brenets on July 18, 2022. (Photo by AFP)
Of course, these devastating weather conditions are not suffered by Europe alone. The whole Northern Hemisphere is under some kind of weather stress at the moment.
The US for instance is suffering one of the worst droughts ever in the California, and Arizona areas as well as Montana in the North. And with the increasingly early fire season already established and a very active hurricane system expected the next couple of months could be devasting for North America. 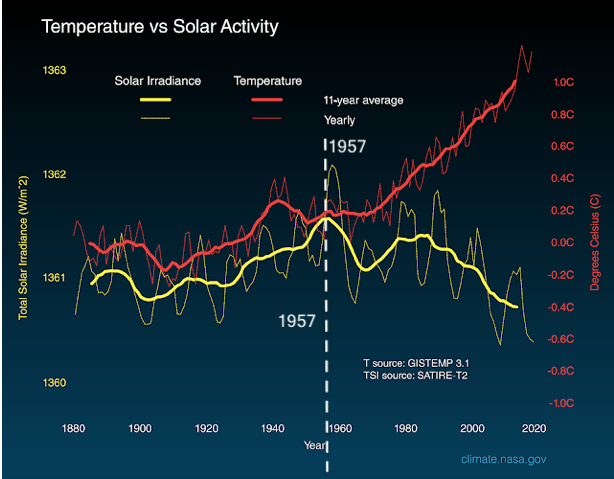 And before you comment take a long look at the NASA graph above—Graphs from NASA's own website show the sudden burst of global warming clearly linked to a record-breaking sunspot explosion which happened on our Sun in 1957. The graph above from NASA clearly shows solar irradiance and global temperature roughly follow each other from 1880 until 1957. However, solar irradiance peaks in 1957 and then begins to drop away while climate temperature begins its steady rise!
More on the 1957 link to global warming and its place in Bible prophecies will be available in my new book (see below) 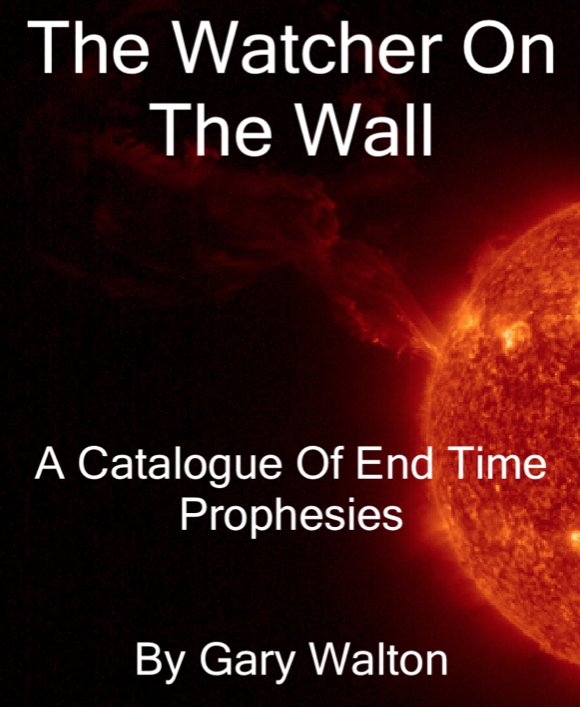 The energy weapons are in full swing. WW3 is not fought with nukes, its done by weather warfare on large masses of people. Life can not survive on a dead planet. Satan hates the image of God. Humans are made in His image. Destroy all the creation is satan's plan.

THEY HAVE BEEN PERFORMING WEATHER MODIFICATION EXCERSIZES FOR A WHILE NOW. MAYBE THEY ARE ACHIEVING THEIR GOALS....