Dangerous Europe heatwaves continue! Europe is lighting up! Heat surge is causing massive crop damage, danger to life, shortage of water, and massive wildfires as a new heatwave is set to break many heat-records from Spain to the UK with no end in sight! 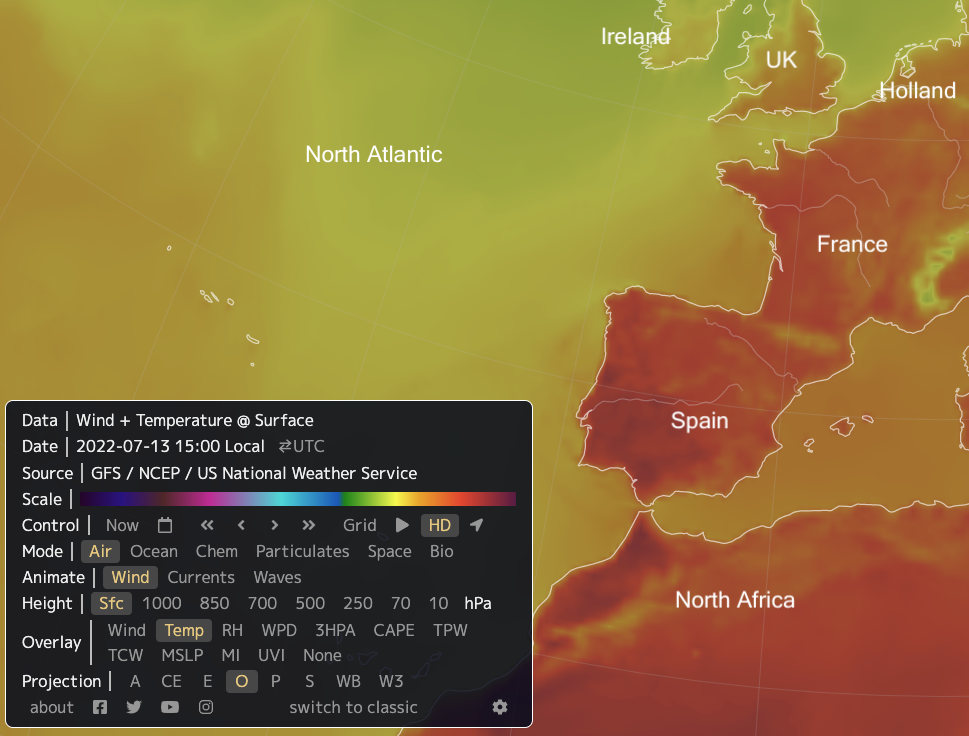 Temperatures were set to soar above 40 degrees Celsius across large parts of Spain and Portugal this week as the Iberian Peninsula faces a second heat wave in less than a month. The mercury was to hit 42 degrees Celsius (107.6 Fahrenheit) in Spain's southeastern region of Extremadura and 41 degrees in Andalusia, Spain's meteorological agency AEMET said.

Temperatures in Spain's normally cooler northwestern region of Galicia were predicted to rise above 35C." This heatwave really has the potential to be exceptional," said AEMET spokesman Ruben del Campo. The heat wave began Sunday and could "last nine or ten days, which would make it one of the three longest heat waves Spain has seen since 1975," he told AFP. Heat waves have become more likely due to climate change, scientists say.

As global temperatures rise over time, heat waves are expected to become more frequent and intense. June also saw Spain grapple with temperatures above 40C in swathes of the country. And the previous month was Spain's hottest May since the beginning of the century. In August 2021 Spain recorded its highest ever temperature when the mercury reached 47.4C, 118 deg F, in the southern town of Montoro. Water reservoirs in Spain stood at 45.3 percent of capacity on Monday, well below the average of 65.7 percent recorded during this period over the past decade.

In neighboring Portugal the thermometer topped 44C over the weekend, fuelling wildfires and vast smoke clouds which were visible in the capital Lisbon. Firefighters brought under control Monday the largest blaze which was burning in the central municipality of Ourem, local officials said. While temperatures eased somewhat in Portugal on Monday they were expected to soar again in the coming days with a 44C forecast for the southeastern city of Evora.

An "intense and prolonged" heatwave has settled over France - the second so far this summer - with temperatures of more than 38C baking much of the country. Tipped to last up to 10 days, the extreme weather follows warnings of "hotter and hotter" summers that forecaster Meteo France says are becoming the norm as a result of global warming. Prime Minister Elisabeth Borne has instructed authorities in all French regions to "mobilize" as the first orange heatwave alerts were set to be issued on Wednesday.

Elderly people, those with disabilities, the homeless, pregnant women, and infants are being warned of heat exposure risks, as are those who work in high-temperature environments such as kitchens and factories. Some 20 towns have canceled Bastille Day fireworks shows slated for the national holiday on Thursday.

France is in the midst of a painful drought with more than a dozen departments imposing water restrictions. State subsidies have already been allocated to farmers, with Borne assuring that her government would pursue a major reform of crop insurance to be implemented from 1 January 2023. Rising mercury Figures by Meteo France show that between the years 1976 and 2000, there were only one to three days annually when the thermometer climbed above 35 degrees in the south of France. Now there are at least three to 10 days each year. The agency predicts that, by the end of the century, the region can expect as many as 40 days of intense heat per year. The periods of hot weather will also become longer and, as with this year, heatwaves will occur during the spring - and even as late as October. Despite climate stress.

Temperatures will build again later this week and over the coming weekend, likely peaking on Sunday and Monday. Some exceptionally high temperatures are possible and cumulative effects of warm nights and hot days are expected to bring widespread impacts on people and infrastructure.

This period of hot weather is expected to continue into the early part of next week, hence an update extending this warning into Monday is likely." What to expect Population-wide adverse health effects are likely to be experienced, not limited to those most vulnerable to extreme heat, leading to potentially serious illness or danger to life. Substantial changes in working practices and daily routines are likely to be required.

Here in SWFL, now and for at least 3 months, our night time lows for Temps are ranging from 78F to 82F but right beside those numbers is "feels like" (heat index) temperature at 88/89! That's our low at 4 in the morning, 89 degrees! Then the news has the balls to say the daytime temp is 93/95F....haha, how can that be? No sun and it was 89....uh OK, 89 feels like degrees! WTF is that? Feels like? Well it feels like it because it is! It is incredible how they word stuff and people just accept it without any rational thought whatsoever. It's so darn hot during the day here you almost can't work outside anymore now, this is why I keep saying how can we make it 7, 8 or more years when right now going outside in sunlight is a limited time thing because you can't endure too much of this pinching burning sun anymore.
And add to that is how irritatingly bright it is too. Impossible to go without sunglasses, impossible, you will go blind it's so reflectivity bright!

I feel so sorry for the wild life and my dog! I'm trying to figure out a way to get my dog to wear sunglasses too! Sounds funny and it is cute but I'm serious, they need protection too. Cataracts now are a given, it's geoengineering causing that.
Ever get caught driving in to the sunset? OMG, instant blindness! Sunsets are reflective mirror like bright pink orangie reflection clouds that completely blind your ability to see the frigging road! I see people's faces when turning at a traffic light in to a sunset. Kind of funny seeing their reactions as I describe or worse! They react but they dismiss why they react as they do. Notice it, it's happening everywhere.
Many thanks again to you and your great research work posting info on your site here Gary! Awesome job!

Thanks for your commitment too, you are a good help. Many people come here to read your comments and I appreciate that!

Hello Gary, I just stumbled onto your website today and absolutely loved your blog/articles. You are correct that many ARE NOT listening, watching or hearing the Trumpets that are sounding of the coming crisis. And what many do not know or will never admit is that our current CLIMATE crisis is not from natural occurrences, but rather Weather Modifications caused by our own governments. They have weather modification machines around the world and are cranked up to cause this "energy crisis" by making the heat waves and/or cold snaps. They have No fly zones around the areas they are manipulating the weather.
I fear if more people don't pull their heads out of the devices, our world will fall to the Evils beyond Bible proportions. Wake Up, Pray Up!
Thanks so much for your work.