Signs And Wonders—A very powerful X-class solar flare has exploded on the sun's surface this afternoon and a Coronal Mass Ejection, (CME) will almost certainly be heading toward Earth coupled with a Strong G3-class geomagnetic storm later tonight!

Credit SDO
A very powerful X-class solar flare has exploded on the sun's surface this afternoon and a Coronal Mass Ejection, (CME) will almost certainly be heading toward Earth. According to Spaceweather.com, the source is active sunspot AR2975--the same sunspot that has already hurled at least two CMEs, (M-class) toward Earth this week.
NASA's Solar Dynamics Observatory recorded the flare's extreme ultraviolet flash: Radiation from the flare ionised the top of Earth's atmosphere, causing a shortwave radio blackout over the Americas. Aviators, mariners, and ham radio operators may have noticed unusual propagation effects at frequencies below 30 MHz. A CME is almost certainly emerging from the blast site. SOHO coronagraphs have not yet detected the cloud, but there is strong circumstantial evidence. For instance, the US Air Force has detected a Type II solar radio burst, a type of natural radio signal generated by CME shock waves. Also, NASA's Solar Dynamics Observatory has imaged a solar tsunami apparently generated by a CME leaving the sun's atmosphere.
Below, a graph from the GOES satellite showing the powerful X-class flare just after 16:30 GMT this afternoon. 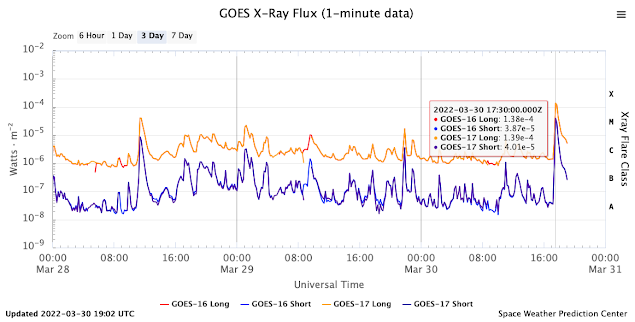 Strong G3-class geomagnetic storms are possible during the early GMT hours of March 31st when a Cannibal CME is expected to hit Earth's magnetic field. During such storms, naked-eye auroras can descend into the USA as far south as, e.g., Illinois and Oregon (geomagnetic latitude 50o). North Americans should be alert for auroras after local nightfall on March 30th. The hours before dawn on March 31st are probably best for Europeans.
Recent Near Misses!

Credit, NOAA GOES East.
Another near miss! On the 15th of Feb, a massive and powerful eruption exploded from our Sun, luckily it was on the far side of the Sun and did not impact Earth's magnetic field which is an incredible piece of luck because its immense power. If the above powerful eruption had hit Earth's magnetic field full on it could have caused extreme damage. Solar Cycle 25 (the latest solar cycle) is heating up after NASA and NOAA told us it would be a quiet affair, however it's not. New sunspot counts from NOAA confirm that the young solar cycle is outperforming the official forecast. The monthly value at the end of January 2022 was more than twice the forecast, and the highest in more than 5 years.
An X-class flare in January could have caused insurmountable damage to Earth's electronic systems had it hit our planet but—Luckily, it missed too.

The solar flare filmed above by NOAA caught the Coronal Mass Ejection being thrown millions of kilometres into space. Powerful X-class flare filmed in the middle of January 2022: Credit NOAA According to NOAA and NASA, this new Solar Cycle, number 25 was predicted to be a quiet, somber affair, however, so far it has proved to be anything but, see graph below.

They predicted that Solar Cycle 25 would peak in July 2025 as a relatively weak cycle, similar in magnitude to its predecessor Solar Cycle 24. Instead, Solar Cycle 25 is shaping up to be stronger. Indeed, geomagnetic activity has nearly tripled since the new solar cycle began.
A Near Miss: A sign from Heaven... 2012 the year the world was supposed to end almost did!
Imagine, if an asteroid big enough to knock modern civilisation back to the MIDDLE AGES appeared out of deep space and buzzed the Earth-Moon system, the near-miss would be instant worldwide headline news, right?—Ten years ago, Earth experienced a closest of shaves just as perilous, but most newspapers and the tv media didn't even mention it. The "impactor" was an extreme solar storm, the most powerful in as much as 150+ years. "If it had hit, we would still be picking up the pieces," says Daniel Baker of the University of Colorado. The powerful coronal mass ejection (CME) tore through Earth's orbit on July 23, 2012.
Fortunately, Earth wasn't there. Instead, the storm cloud hit the STEREO-A spacecraft. "I have come away from our recent studies more convinced than ever that Earth and its inhabitants were incredibly fortunate that the 2012 eruption happened when it did," says Baker. "If the eruption had occurred only one week earlier, Earth would have been in the line of fire and would have suffered "insurmountable damage to its electronic infrastructure."
Extreme solar storms pose a threat to all forms of high-technology. They begin with an explosion--a "solar flare"—in the magnetic canopy of a sunspot. X-rays and extreme UV radiation reach Earth at light speed, ionizing the upper layers of our atmosphere; side-effects of this "solar EMP" include radio blackouts and GPS navigation errors. Minutes to hours later, the energetic particles arrive. Moving only slightly slower than light itself, electrons and protons accelerated by the blast can electrify satellites and damage their electronics. Then come the CMEs, billion-ton clouds of magnetised plasma that take a day or more to cross the Sun-Earth divide.
Analysts believe that a direct hit by an extreme CME such as the one that missed Earth in July 2012 could cause widespread power blackouts, disabling everything that plugs into a wall socket. Most people wouldn't even be able to flush their toilet because urban water supplies largely rely on electric pumps
To make matters worse, geologists have been expressing concerns about the magnetic field that shields Earth from deadly solar radiation. In 2019, when the US National Oceanic and Atmospheric Administration was forced to update its World Magnetic Model a year early after finding that the magnetic north pole was rapidly moving out of the Canadian Arctic and toward Siberia. The US National Aeronautics and Space Administration is tracking an immense, growing, and slowly splitting "dent" in the Earth's Magnetic field. The area, known as the South Atlantic Anomaly, is situated in the southern hemisphere between South America and the southern Atlantic Ocean off the coast of southwestern Africa.
According to recent NASA monitoring and modelling, the area is expanding westward and becoming weaker and is expected to completely split into two separate cells, each spanning thousands of kilometres across, very soon.
Spaceweather 2022
Home
at March 30, 2022

What about the waves of terror the sweep the streets of the west bank and have been going on since the late 1940's???)

Isn't that a tad off-topic?

Dear Gary,
Thank you so much once again for your timely updates. A few days ago, as you know, we were hit with some tough days of solar storms. These storms were felt down south with a couple quakes in the upper 6 scale bumping into the 7 scale. Then a 7.2 quake was reduced to a 7. Why the change?
Due to a heads-up by you, I went to https://www.gi.alaska.edu/monitors/aurora-forecast where I usually go to look for the Aurora forecast. My head was throbbing and the storm was rated at a 7 on their daily forecast of geomagnetic activity. We also had a couple of 6’s in there as well. That explained my headaches and my handheld meter showing the heightened intensity of the storm.
It was forecast that this storm would be seen all the way down into the Lower 49. Yep, that is correct, “49,” as Alaska is over Hawaii as well. I called some friends way down south in the Pacific North West and gave them the heads up. They were blown away by the angels dancing, which some of us call the Northern Lights, having such vibrant colors.
Now going back to the above-mentioned website.... the scale was changed. The 7 had been reduced to a 3, and the 6’s were gone. You do not see these storms down south when they are just a 3. This tells me that for some reason they massaged the numbers once again.
I just have to ponder, 'do they not think we will not notice they are massaging their work?' Feels like more fake news to me! I am so pleased that years ago a teacher named Mr. Springer required us to read, in high school, books like Brave New World, 1984, Animal Farm, and Fahrenheit 451. And the biggest thing he taught us was not to listen to the news, it would be mostly lies. He stated, 'focus on the pictures and what is happening in the distance behind the reporter.' Of course, with the way they can now alter pictures with A.I., that doesn't work near as well. It is best to get the news or event directly from a trusted source that was there. Yep, just like I did, “wow L-B, those northern lights were rocking as we hardly ever get them here.” But of course, I know they were lying to me, after all, the storm was not a 7, it was a 3!!!
Once again, just my thoughts from this Alaskan. I hope the followers of the Big Wobble are buying you a monthly cup of coffee. Heck, I’ll lead the charge and buy you a cup tonight. I hope you drown in coffee this month!!!

Blessings, Just Me in Alaska, Laughing-Bear