Boom! Just a couple of hours ago, sunspot AR2887 blasted a powerful X-class flare (the first in 4 years) directly toward Earth! The blast created a massive tsunami of plasma in the sun's atmosphere which will hit Earth's magnetosphere in a couple of days

The new Solar Cycle 25 has been punching way above its weight since NASA officially launched its beginning last summer. Since last month a very active sun has blasted numerous M-class flares some in our direction, however, just a couple of hours ago, sunspot AR2887 blasted a powerful X-class flare directly toward Earth! 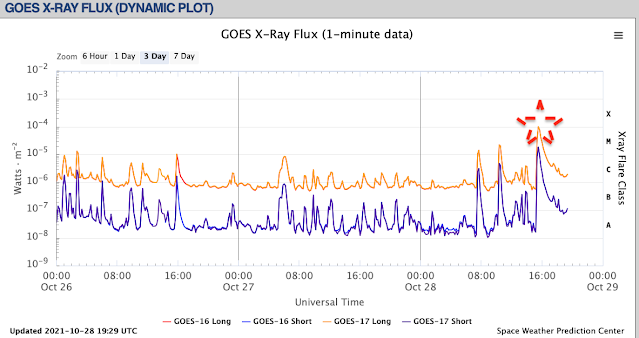 Today's powerful X-class flare is the first since September the 6th 2017 when tiny sunspot AR2673 expanded more than 10-fold in a single day and suddenly became one of the largest sunspots of the year and blasted an X9.3-class solar flare-the, strongest solar flare in more than a decade, the flare was the equal 14th biggest ever recorded.
Today's X1-class solar flare from Earth-facing sunspot AR2887 is nowhere as powerful as the one in 2017, however, it is still mighty powerful.

According to Spaceweather.com, the blast at 1535 UT on Oct. 28th created a massive tsunami of plasma in the sun's atmosphere:

The blast also hurled a CME into space. Coronagraph images are not yet available, but evidence for a CME is already persuasive. The USAF reports strong Type II and Type IV radio emissions generated by a CME plowing through the sun's atmosphere. In addition, energetic particles accelerated at the leading edge of a CME have already reached Earth.

When will the CME itself arrive? Assuming that it is Earth-directed, probably on Oct. 30th or 31st. Fresh data from SOHO coronagraphs will allow a more precise forecast, so stay tuned.

During the flare, a pulse of X-rays and extreme UV radiation ionized the top of Earth's atmosphere, causing a strong shortwave radio blackout centered on South America.

A coronal mass ejection (CME) launched into space on Oct. 28th by exploding sunspot AR2887 is heading almost directly for Earth. SOHO coronagraphs recorded the CME racing away from the sun faster than 1260 km/s (2.8 million mph):

The movie is full of "snow"--speckles caused by solar protons striking the coronagraph's CCD camera. These particles were accelerated toward the spacecraft (and toward Earth) by shock waves on the leading edge of the CME. Traveling at relativistic speeds, the protons reached us in less than an hour. The CME itself will take more than two days to cross the sun-Earth divide. ETA: Oct. 30th.

Sunspot AR2887 may not be finished yet. It has already produced two M-class flares and an X-flare today. The active region is directly facing Earth, so any additional eruptions should be geoeffective.

Solar Cycle 25 has so far, in its short life often been punching above its weight!

Thanks for posting this LaPalma video clip Gary. Keeping watch on the quake monitoring system for this volcano and just so far today (11-2-21) 32 earthquakes there! Most are at a 10km depth, deepest one I found was 35km, but only 2 or three of the 32 counted today were that deep. A couple are as low as 5km. That means the magma is that close to the surface ground our feet walk on. Magma is rising is what that means.
It would be interesting to be able to see their local news or some real time information because I heard some saying they are re-opening schools etc since evacuations happened. As if things are recovering. How can that be true? How can people continue to live with quakes every hour? All that heat, smoke, and ash? Bizzare! Well the grid pattern for those quakes is still obvious and numerous red spot for quake locations are in the same spots repeatedly. Like a precise slicing is underway.
Oh who cares, just go get your 3rd vac booster shot! (Sarcasm)
Its here starting for seniors and immune compromised.
Scary!
Stay well my friend!

I live on the coast not a million miles north from this thing and we are currently 5 metres under sea level, it is a worry.

Thanks for the info buddy