A killer algae bloom more deadly than toxic nerve gas: It's one of the deadliest toxins on the planet. Unofficially, it is called the "very fast death factor." The CIA uses it in suicide pills for agents: Family of three and a dog in California dead after exposure 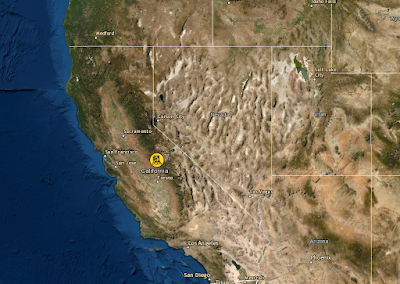 Algae blooms have become a nasty phenomenon in our modern area killing billions of tons of marine life every year around the world. They are now a threat to mankind too, stripping away natural biodiversities such as food plants and drinking water.
On a remote trail in California's Sierra National Forest called the Devil's Gulch, a family of three and their dog was recently found dead. Authorities were at a loss to explain what happened. "I've worked in different capacities, but I've never seen a death like this," the county sheriff told the press.

ASU News talked to Taylor Weiss, an Arizona State University assistant professor in environmental and resource management in the Polytechnic School and a member of the Arizona Center for Algae Technology and Innovation—where research is being done to harness algae technology to produce renewable energy, food, feed, and other valuable products while performing environmental services to support a more sustainable future for society—about this deadly substance.

Question: My first thought was, I didn't know that algae could kill.Answer: It is among the most deadly toxins on the entire planet. If you made a list of the top 10, VX gas-synthetic (a nerve agent) would only be one of the top 10. All the rest are held by algae. ...The tidbit of history that people gloss over is that the CIA actually stopped issuing cyanide capsules a long time ago. But we know for a fact that U-2 pilots who flew over Russia were issued fake coins with needles in them laced with saxitoxin to kill themselves in the event of torture. So we know what they do. We know the most highly effective chemical weapons designed to mimic their activities. They accomplish the same goal. They are paralytic agents that paralyze your nerves that control your skeletal muscles. They lead to your diaphragm becoming unable to move, which means you suffocate, as almost certainly what seems to have happened to this particular family on this occasion.

Interesting post, thanks for writing it Gary!
Here in FL,we are plagued with toxic algae for so long that it's being ignored by most residents and la la land vacationers now....until they cant breath or get sick then it might be news worthy. But even those news worthy telling's are starting to change narratives.....are we so surprised!? Lol.
Recently our local news started reporting the algae is ok. No worries, no harm go fishing.....if you can find a fish that is.

Well good thing I know better. For me a bit more sensitive then the typical average clueless person, whenever I am working in a residence on a waterway in about 15 to 20 minutes I begin choking. At first it gives you a tickle cough that wont quit. Then your head starts to ache, muscle aches are next. Thankfully it never went further then body aches and coughing for me and within an hour of leaving that water way redidence it is gone. But news says it isnt toxic anymore....ok....?
It's sad and it sucks but it is what it is as a result of yet again more toxic "progress" via environmental destruction.

I appreciate your report of this but it falls mostly on deaf ears I suspect. Our tourism does not stop and they dont know the water is poison. Most higher end residents dont know it either if you can believe that one! We have red tide they say to me?..., as I'm choking in their home. Uh yea, I say....been here since Oct. 2020 non stop this round.
News also has adopted the new and improved narrative to go along with " it's not toxic anymore", to it's normal, comes every year for a hundred years, they say now. Lol.....lmao! Wow, what a f'ing lie that is. Uh NO, it isnt normal and should not be here every year is the truth, but with this change in narrative I think it means it ain't going away anymore so shhhhh! Dont tell the tourists we need the business$$$$, real estate prices are at their highest ever today!

One million.....1.5 million? How much will you pay for real estate on the algae water? No kidding, they are paying it without blinking an eye or any seemingly negative responce to any of it. I get a kick out of my peers real estate reports in our MLS database. Best fishing in the world. Kayak, swim, fish blah blah bull shit! That's what we "used to be", are not now though. Oh well. Forward! Build back better. Make Amerixa Great Again. Funny stuff that kills ya! Fools are the real toxic problem these days.
Best to all. Be careful out there!

You too Hawkeye and thanks