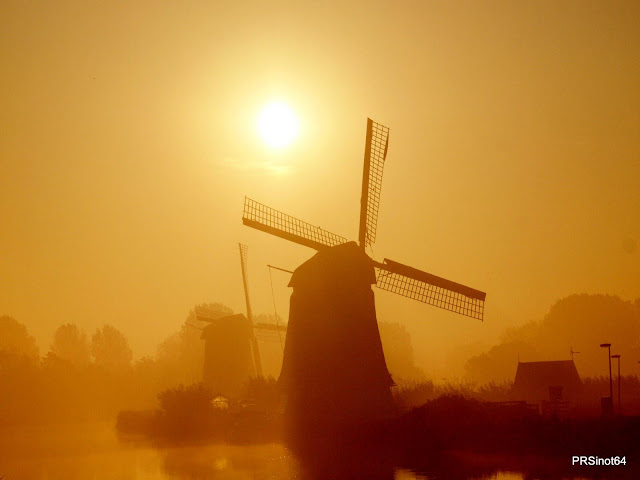 This morning I got up early and went for a long walk. At the back of my house there is a bird sanctuary with canals, windmills and beautiful Dutch countryside, see picture above, taken by my friend Patrick.

Lucifer will continue to head north in the coming days with Italy's capital Rome in its sights. Red alerts have been issued across many areas with Friday expected to especially nasty. 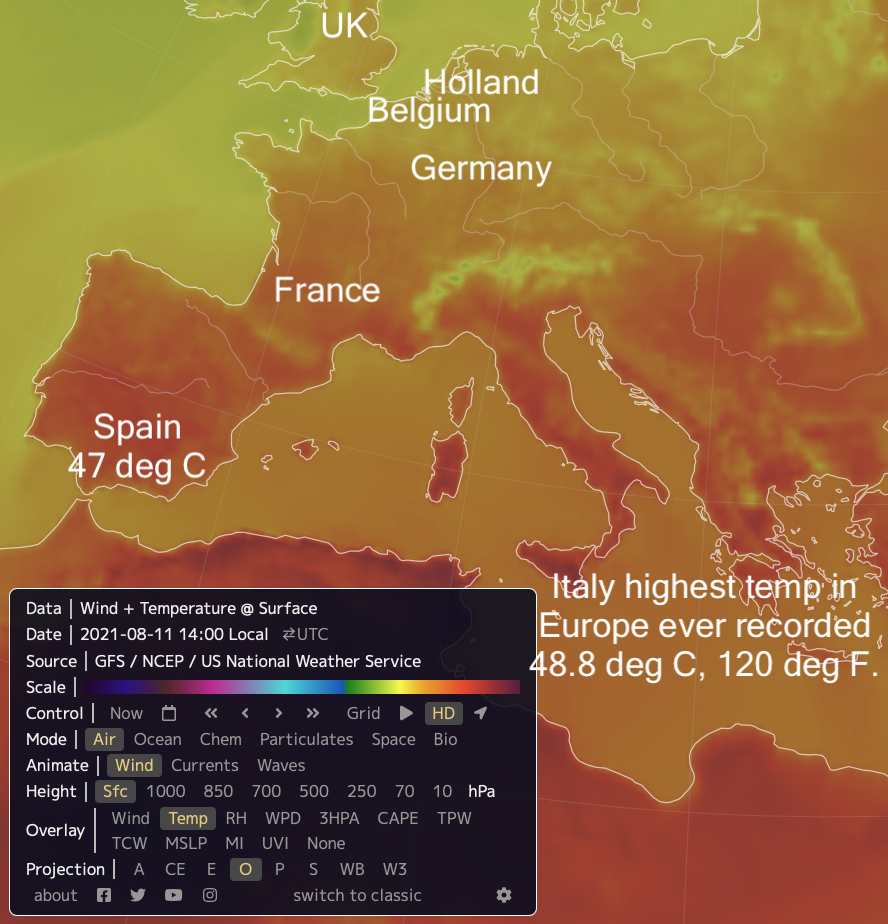 Earthwindmap showing the heat effects of anti cyclone Lucifer across the Mediterranean.

According to the BBC, the Mediterranean heatwave, which has seen some countries record their highest temperatures in decades, has led to the spread of wildfires across southern Italy, with Sicily, Calabria and Puglia the worst-hit regions. Italian firefighters on Wednesday said they had been involved in more than 300 operations in Sicily and Calabria over a 12-hour period, battling through the night to control blazes burning thousands of acres of land.

Separately, wildfires are continuing across Greece, fuelled by strong winds and parched vegetation. Foreign teams are helping to tackle blazes in what Prime Minister Kyriakos Mitsotakis has described as a "nightmarish summer".

The high temperatures in Portland, part of a usually temperate region, would break all-time records this week if the late June heat wave had not done so already. Due to Covid and other problems, more people are experiencing homelessness, a population vulnerable to extreme heat.

Across the pond, Spain and Portugal are preparing for a heat wave that has already wreaked havoc in southeastern Europe, especially in Greece, and is now heading for the Iberian Peninsula. A heat wave fueled by the hot air in North Africa has already swept across the Mediterranean region, triggering wildfires in Italy, Turkey and Algeria, where dozens of people have lost their lives.

The Spanish Meteorological Agency has announced that temperatures will exceed 44 degrees Celsius in some areas by Monday. Temperatures are expected to rise above 40C in parts of south-east France forecasters have warned as the so-called ‘heat dome’ pushes north into France from the Mediterranean.

On Wednesday, “temperatures reached between 35 to 40C and could exceed 40C in parts of Provence and the Rhône Valley later this week,” national forecaster Météo France said.

After record-breaking wildfires flash floods are now ravaging Turkey. The floods are rising so fast people have become stranded on rooftops, sweeping away cars and triggering mudslides. The Turkish military have evacuated a regional hospital on Wednesday, plucking people from rooftops. Flash floods have wreaked havoc across Turkey's Black Sea coastline, washing away cars and homes. Eight people were taken to hospital after a bridge was destroyed by the surging flood waters yesterday according to The Daily Mail.

Increasing Earth Wobble is stirring the atmosphere. Causing extreme weather worldwide. Going to get much worse. Establishment will continue to blame it on Global Warming, Climate Change, Geoengineering and Weather Warfare. But earthquakes, volcanoes and fireballs are all off the charts. Establishment trying to hide major earth changes underway. Natural event that occurs every 3,657 years.