Black substances were discovered in syringes and a vial after 2.6 million Moderna vaccines doses were pulled in Japan a metal substance was also discovered: Two men with no underlying health issues died within days of receiving their second jab of Moderna Inc.'s COVID-19 vaccine 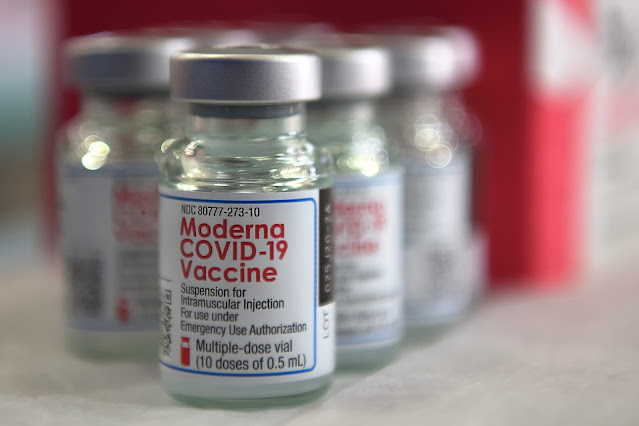 Vials containing the Moderna COVID-19 vaccine sit on a table in preparation for vaccinations at Kadena Air Base, Japan. Wikipedia.
Black substances were discovered in syringes and a vial, while unidentified pink substances were spotted in a different syringe with a Moderna vaccine dose, according to Japan’s public broadcaster, NHK.
Two men in their 30s with no underlying health issues or allergies died within days of receiving their second jab of Moderna Inc.'s COVID-19 vaccine this month, the health ministry announced Aug. 28. The shots were manufactured on the same production line in Spain where vials of the vaccine were previously found to be contaminated.
Ministry officials said it remains unclear whether the doses the men received were tainted or untainted or that their deaths were due to a side effect of the vaccine. The Ministry of Health, Labor, and Welfare instructed health experts to investigate the cases.
The move followed the ministry’s Aug. 26 announcement that 1.63 million Moderna doses under three lot numbers manufactured at the Spanish plant will be halted after a metal substance was discovered in 390 shots scheduled to be administered at mass vaccination centers in Tokyo and four other prefectures. Full Story
Meanwhile, a report by RT, claims Japanese officials have suspended the use of millions of doses of the Moderna Covid vaccine after foreign substances were found in a number of batches and two people died after receiving jabs from the affected lots.
The Japanese government discovered the contamination over the weekend in a batch of the Moderna Covid vaccine in Gunma prefecture, close to Tokyo, forcing officials to temporarily suspend the use of the vaccines. The decision to suspend a total of 2.6 million doses of the Moderna vaccines comes after 1.63 million shots were halted last week following the discovery of contaminants in some vials in a batch that was shipped to more than 860 vaccination centers across the country.
Something sinister?
Carbon nanotubes in a dish assemble themselves into a nanowire in seconds under the influence of a custom-built Tesla coil created by scientists at Rice University. But the scientists don't limit their aspirations for the phenomenon they call Teslaphoresis to simple nanowires.
The team led by Rice research scientist Paul Cherukuri sees its invention as setting a path toward the assembly of matter from the bottom up on nano and macro scales. There are even hints of a tractor beam effect in watching an assembled nanowire being pulled toward the coil. Read more at http://news.rice.edu/2016/04/14/nanot...
Coronavirus 2021
Front Page
at August 31, 2021