Manatee County issued an emergency evacuation order for nearby residents of the troubled Piney Point industrial site after a breach was discovered Friday afternoon, sparking fears that it could lead to millions of gallons of polluted water flooding the neighbourhoods and the collapse of the gypsum stacks, which contain radioactive material, triggering an environmental disaster. “Working with the Florida Department of Environmental Protection, HRK Holdings and county administration, we felt that the threat was imminent and ordered an evacuation,” said Manatee County Director of Public Safety Jacob Saur, whose department includes emergency management.

The evacuation order includes people who live south of Buckeye Road East from 31st Terrace East to Oneil Road and north of 113th Street East. Those residents need to evacuate their homes immediately. The Red Cross has been called in to assist residents who need help seeking shelter at a hotel, Saur said. Residents with questions can call 311. The Manatee County Sheriff’s Office and the Florida Highway Patrol closed off the roads. Local and state emergency management teams descended on the scene after the breach was observed in the wall of a leaking pond, which holds 400 million gallons of water containing phosphorus and nitrogen from the old phosphate mining property. 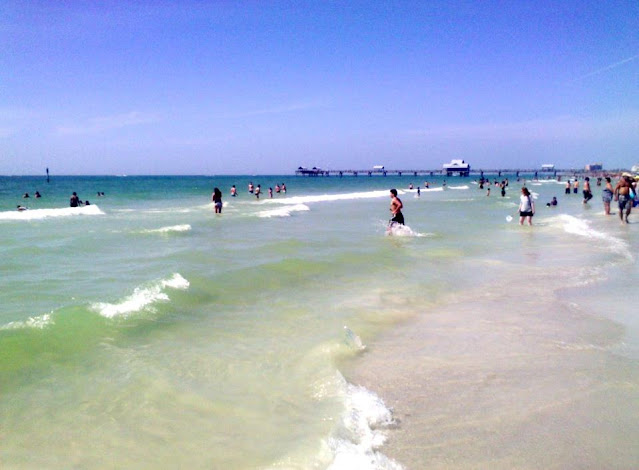 Too much nitrogen and phosphorus lead to polluted water and algae, resulting in serious environmental and health issues. A “breakout of seepage” along the eastern wall of the New Gypsum Stack South reservoir was detected around 4 p.m. Friday, according to the Florida Department of Environmental Protection. Residents in the 1/2-mile area were sent emergency evacuation notifications on their smartphones. “FDEP’s Emergency Management staff are on-site and coordinating with Manatee County to provide assistance with an engineered blockade of the natural landscape to halt the breakout to contain the system,” Weesam Khoury, FDEP’s press secretary, said in a statement.

The county’s Emergency Management and Public Works teams also responded. Throughout the evening, crews worked to control the flow of the water and prevent the gypsum stack from collapsing by adding fill materials at the base to stabilize the area. The seepage breach is concentrated in a section of the wall about 30 feet off the ground. “They are actively backing up the support of the southeast wall, and we are prepared to source additional rock,” Acting County Administrator Scott Hopes said during a Friday night press conference. There are three gypsum stacks on the site, but as of Friday night, engineers believed that the New Gypsum Stack South is the only one in danger of collapsing.

If it does, engineers don’t expect the other two gypsum stacks to be affected. “The hope is that with the flow rate coming out of the siphon pipes, that we can rapidly deplete the water and pressure and avoid a full breach,” Hopes added, referring to the approval Piney Point received from state environmental leaders to begin draining the polluted water into Tampa Bay to relieve some of the pressure on the gypsum stack. To try to prevent the gypsum stack from collapsing, FDEP approved an emergency final order on Monday allowing site operators to begin pumping water into Tampa Bay to relieve the pressure on it. By Friday evening, site operators doubled the rate of that discharge, which is now sending 22,000 gallons of water per minute into the bay.

Even at that rate, officials say it would take almost two weeks to completely empty the leaking pond of polluted water. Site operators have already dumped more than 30 million gallons of that water into Tampa Bay, which scientists fear could lead to a widespread algae bloom. Algae can lead to fish getting sick, or dying, and can affect humans if they come into contact with the water or eat fish or shellfish sickened by the algae. If the gypsum stacks collapse, engineers fear that the 800 million gallons of wastewater stored on the site would flood neighbouring properties before draining into local waterways, such as Bishop Harbor, Cockroach Bay and Tampa Bay. Right now, they’re focusing on the one breached pond holding 400 million gallons. “An uncontrolled release of up to 400 million gallons of water is possible but has not yet occurred,” Manatee County said in a statement late Friday. The stacks’ collapse could lead to "slightly radioactive" material being spewed into the surrounding area.

Phosphogypsum results from producing fertilizer from phosphate. The Environmental Protection Agency regulates it because in concentrated quantities it can be radioactive. Process water is also a chemical byproduct of phosphate mining. Because it is rich in nitrogen and phosphorous, it typically undergoes a cleaning process before it is released into local waterways. Due to the emergency, that’s not happening. Hopes emphasized that the conditions on the site are constantly changing. A tour he took earlier this morning looked totally different from the photos and videos he reviewed in the evening. “Right now, this is a dynamic situation. It has been changing by the hours,” he explained. The Board of County Commissioners voted unanimously Thursday to approve a state of emergency regarding the Piney Point leak, which gives county leaders access to funds, manpower and other resources.

Friday’s breach was the latest in a series of developments that began last week when site operators discovered a leak in the 77-acre New Gypsum Stack South pond, which holds an estimated 480 million gallons of the polluted water. As of Friday evening, discharges from the seepage breach were being stored in Piney Point’s lined stormwater system, preventing any contaminated process water from leaving the site. But that stormwater pond is used as a backup system and is quickly reaching its limit. Speaking at the press conference, two of Manatee County’s state lawmakers promised to find a solution to Piney Point. “It’s become a priority for the county commission, but sadly, we’re here tonight,” said state Sen. Jim Boyd, R-Bradenton.

“There are funds available for emergency work that needs to be done.” “This quarter-century debate about what to do with this property needs to come to an end. This has to end,” state Rep. Will Robinson, R-Bradenton, added. In a statement released Friday afternoon, FDEP officials said they remain committed to holding HRK Holdings, LLC, the company that owns Piney Point, responsible for any potential failure. “DEP is coordinating with local stakeholders and we began water quality monitoring of Port Manatee on March 30 to protect human health and safety, and to transparently communicate with the public as this situation evolves,” the department said. “DEP is dedicated to full enforcement for any damages to our state’s resources and holding HRK accountable for this event.” FDEP officials are monitoring the site 24/7 and will begin posting updates on water quality and the situation at Piney Point at www.ProtectingFloridaTogether.gov/PineyPointUpdate.

It appears to me as if the Biden EPA is engineering another environmental disaster such as the Gold King Mine debacle. It was blinkered EPA policies and neglect which led up to the uncontrolled release of toxic mining-byproduct-polluted waters into the Animas and San Juan Rivers, emptying into Lake Powell.

Now again we see the same script being used against Florida and its mining industry. Again we see mining companies being prevented from doing the sensible thing and the EPA neglecting the problems they're creating then blaming and penalizing the miners.

Same. Exact. Script. It worked so well for Obama, naturally Biden will employ the same strategy. Florida must be punished for having the temerity to think for itself and allow independence for its citizens and industry.

To be honest, most people outside the US see a country having to deal with an aged and crumbling infrastructure which is being run by crooked individuals. Like everything else in the tacky world of business and politics it's all about money.